The case, one of several that has drawn international attention to South Korean Internet censorship, has been going on for the better part of a year and was being closely watched for its interpretation of how South Korea’s National Security Act extends to Twitter. 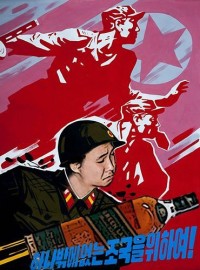 The law targets those who “praise, encourage, disseminate or cooperate” with anti-social groups, in this case the North Korean government. Access to many North Korean websites and other Internet resources are blocked to South Korean Internet connections under the law.

Blocking Twitter is considerably more difficult, partly because even if official tweets are blocked the same mechanism wouldn’t automatically stop South Koreans from seeing retweets of the same messages.

Park, who was released on bail after the sentencing, was accused of retweeting around 100 messages from the Uriminzokkiri Twitter channel. Park didn’t deny sending the messages but said they were intended as satire. In one message, he sent out a remixed version of a North Korean propaganda poster with a soldier’s face replaced with his own (image, see right.)

The judge accepted that some of the posts were parodies, according to The New York Times, but said that taken as a whole the posts were “supporting and joining forces with an antistate entity.”