Could North Korea be on the cusp of a 3D movie boom? A movie theater capable of showing 3D motion pictures has been built at Pyongyang’s Rungna People’s Pleasure Park, according to a weekend report by the state-run Korea Central News Agency.

The theater, which also includes video game rooms, was inspected recently by Kim Jong Un, who called for similar theaters to be built across the country, the report said.

Movies were a passion of Kim Jong Un’s father, Kim Jong Il. He is said to have had a massive collection of movies that spanned the the classics to modern films and also to have tried his hand at directing local motion pictures. To-date, it’s unclear how much of that passion of movies has rubbed off on Kim Jong Un, who assumed leadership of the country when his father passed away in late 2011.

He looked round various places of the cinema to learn about in detail its construction, specifications of equipment and plan to operate the cinema.

After going round the audience rooms, control room and editing room, he was greatly pleased that soldier-builders successfully constructed the modern cinema in a brief span of time. — KCNA, September 14, 2013

Kim reportedly watched two 3D movies, “Winners” and “Don’t wait for us,” in “Audience room No. 5” of the complex. The movies were produced by Mokran Video, one of North Korea’s major movie production houses.

Images published by KCNA showed the audience room was a small theater with just two rows of four seats each. 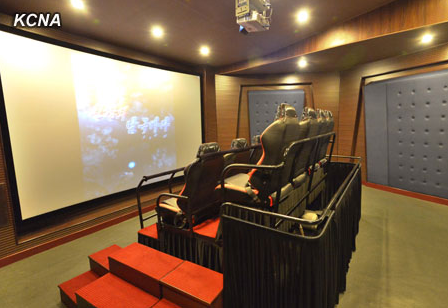 The seats look a little like those found in sports cars.

In the KCNA image, a projector can be seen on the ceiling of the room.

KCNA referred to the movies as “rhythmic 3D.” While it’s unclear what that means, the seats shown in the image look like they might be on some sort of platform that vibrates or moves along with the movie.

He said it is important to successfully blend rhythms with themes of films in order to let youth, children and working people feel interesting in the imaginary world the same way they do in reality, while watching 3-d films. — KCNA, September 14, 2013

The new complex was built by soldiers and Kim reportedly told officials it is important to build such cinemas in provincial capitals across North Korea.

He said that the appearance of the modern cinema would help make people’s laughter ring out more loudly at the pleasure park. — KCNA, September 14, 2013

In addition to movies, the complex is reported to have video game rooms. In a beautiful example of KCNA’s unusual use of English, the news agency reported:

Going round the rooms, he was greatly pleased that visitors can enjoy peculiar games under the care of the WPK.

The video games rooms are a gift the WPK presented to the people, he said, underscoring the need to raise the sense of responsibility and role of the service persons and successfully manage equipment if their operation is to be put on normal footing and schoolchildren and working people are to be provided with best convenience. — KCNA, September 14, 2013

Another KCNA image showed Kim walking past the “peculiar games.” 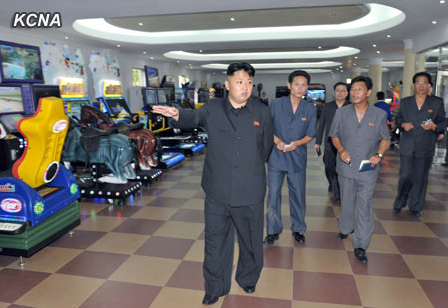 2 Comments on "Pyongyang gets 3D movies"