How it should look: KCNA Watch viewed from an unrestricted Internet connection

KCNA Watch, a website that collects articles, pictures and video from the Korean Central News Agency, isn’t making friends on either side of the Korean border.

A communications regulator in South Korea has blocked access to the service while the North Korean government has restricted access to its services from New Zealand, apparently due to the way KCNA Watch collects its stories.

The South Korea block, which happened on Friday, was reported over the weekend by NK News. KCNA Watch currently operates as a part of NK News.

Visitors to the site from South Korea currently get redirected to the Korea Communications Standards Commission’s (KCSC) warning site that advises the site they attempted to access contains illegal information. The same message is seen when accessing other banned websites including those from North Korea and those containing pornography. 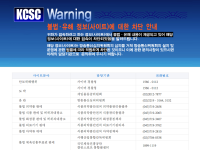 How it looks in South Korea: Attempts to access KCNA result in a redirect to the KCSC warning site

The KCSC doesn’t detail the reasons for its actions, but a clue can be gathered from the blocking being carried out.

Rather than ban access to all of NK News, the KCSC has targeted just the KCNA Watch section. This is possible because it runs on a different server from the rest of NK News and operates under a subdomain, kcnawatch.nknews.org.

KCNA Watch likely got blacklisted because it carries the full text of all KCNA articles in Korean, English and Chinese, which means it’s also an easy way to access KCNA content and get around the KSCS block on KCNA’s own sites.

Frank Feinstein, the New Zealand-based researcher who runs the service, said he wasn’t surprised by the block.

“I felt this one was coming,” he said via email. “KCNAWatch does Korean, English and Chinese now. I started a YouTube channel also that uploads the KCNA raw video files (that are nearly all in Korean) and at least one went viral on another South Korean video-sharing site.”

Despite its widespread censorship of North Korean-related content, the KCSC’s blocks are usually targeted at those sites that idolize rather than analyze North Korea. Academic and analytical sites are usually available from South Korean Internet connections.

The second block, the one on access to KCNA from New Zealand, was apparently in retaliation for the way in which KCNA Watch gains access to KCNA material. Lacking a dedicated KCNA feed, the site uses multiple automated agents to scrape text, images and video from the website multiple times a day.

The computers doing the accessing use multiple Internet addresses specifically to make it more difficult to block.

“[KCNA] frequently tinker with how many views an IP can have before it’s SlowLoris/DDoS security kicks in,” said Feinstein of the resistance he has encountered in the past when accessing the site.

So, it could be that security software interpreted the numerous access attempts as a cyber-attack — something North Korea has experienced several times in the last year — or it could be that system administrators simply got bored of the scraping.