News reports that centered on Jang Song Thaek were deleted from the Korean Central News Agency’s website in the hours before state media announced his removal from power on Monday.

The reports vanished from the Korean-language portion of the site at around 5am Korean time on Monday (8pm GMT Sunday), said Frank Feinstein, a New Zealand-based researcher who runs the KCNA Watch service.

He said only the reports in which Jang was a central character were removed. Others that mentioned him in passing remained on the KCNA website. Feinstein was using his own index of KCNA articles as a reference to the original URLs.

“This is the first time I’ve caught them doing this red-handed,” he said in an email.

Four hours after the articles were deleted, they reappeared.

“There’s been absolutely no explanation as to why the articles were reinstated,” he said.

Among the articles that disappeared for several hours were some of the most recent that reported on Jang’s activities, including two from November 6 on Jang’s meeting with a visiting delegation from Japanese sports associations. Jang was meeting in his capacity as chairman of the State Physical Culture and Sports Guidance Commission.

A later check by Feinstein of KCNA news photos that included Jang showed all remained available on the site.

Separately, South Korea’s Unification Ministry said North Korean state television aired a re-edited version of a documentary in which images of Jang had been removed.

The images below, from the ministry, shows how two scenes in the documentary were reedited to remove shots that included Jang (circled). As it is difficult to remove people from video images, the state propagandists used video shots taken at the same from other angles. 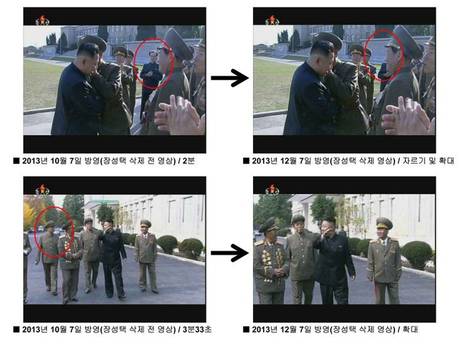 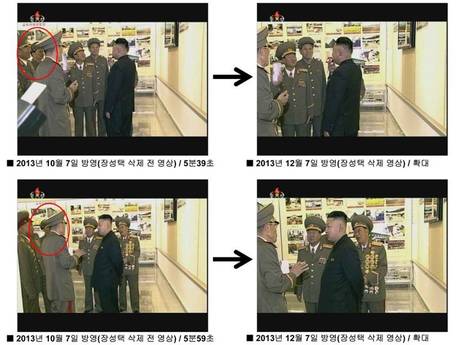 1 Comment on "KCNA deleted, then restored old reports on Jang"