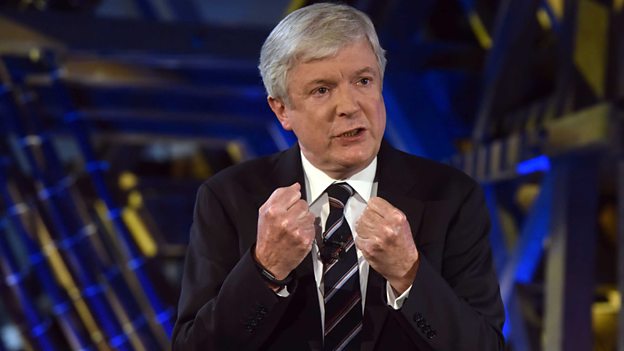 Tony Hall, director general of the BBC, outlines proposals for the broadcaster over the next decade during a speech at the Science Museum in London on Sept. 7, 2015. (Image: BBC)

The BBC has proposed launching a daily news service for North Korea, but the broadcast could be years from starting, if it starts at all.

Plans for the service were included in a report published on Monday by the BBC that outline its proposals for the next decade. Among the, additional efforts by the BBC World Service to focus on “parts of the world where there is a democratic deficit in impartial news.”

As part of that effort, the BBC said it wants to begin “A daily news programme, seven days a week, for North Korea, initially delivered through shortwave.”

But the plan will have to be agreed upon with the British government, and that’s where there might be problems. Some suspect that the government will be reluctant to give the BBC the go-ahead to launch such a service because it might complicate diplomatic relations with North Korea.

Certainly, North Korea doesn’t like its citizens having access to unfiltered information. The country is one of the world’s most repressive, it heavily censors media and citizens are only allowed diet of propaganda from the government.

Radio is still the only way of getting information into the country in a timely manner and a handful of broadcasters program several hours a day of news and information for the country, but even then there are difficulties. The two biggest hurdles are the lack of radios that can freely tune the dial — North Korean radios are meant to be fixed to state channels — and government jamming that attempts to block foreign signals with noise.

So, if the BBC begins a North Korean service — in doing so attempting to subvert the government’s lock on free information — the British embassy in Pyongyang might be on the receiving end of complaints.

The requirement for government sign-off is included in the BBC World Service’s operating agreement, which states:

Michael Glendinning, director of the European Alliance for Human Rights in North Korea, has been making the case for a Korean service for sometime and believes, “the obstacles to establish a service are still great.”

He sees contradiction in the operating agreement and previous statements by the Foreign and Commonwealth Office (FCO) that the BBC is alone responsible for such decisions.

In 2013, Foreign Secretary Hugo Swire deferred comment on a BBC broadcast for North Korea saying “It is primarily an issue for the BBC, which has, of course, full editorial, operational and managerial independence.”

But not quite. The BBC will have to talk to the Foreign Office about funding and agree the new service with it.

“This would suggest to me that the FCO is ducking its responsibilities and will continue to lay the decision at the door of the BBC, knowing full well that that their decision is the only one that matters,” said Glendinning.