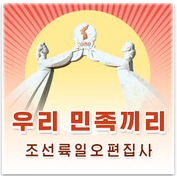 Uriminzokkiri, the Chinese-based website that carries most of North Korea’s official propaganda output, has started a podcast and it’s available through Apple’s iTunes.

The podcast is advertised on the front page of the website with a link that jumps to an Apple iTunes page. The page currently carries ten episodes of the podcast, which is entirely in Korean and combines spoken word with music.

The episodes were uploaded between February 20 and 23 this year and range between 3 minutes and 22 minutes long. There haven’t been any updates in the last month.

It’s classified in the “News and Politics” section of iTunes’ podcasts and doesn’t appear to have attracted any listener reviews yet.

Apple requires podcasts to be approved before they appear in iTunes and it’s not clear if the Uriminzokkiri content was vetted by Apple U.S. or Korea. Apple did not respond to a request for comment.

Uriminzokkiri has been operating around 10 years and is believed to be based in Shenyang, which is close to the North Korean border. The site, which is registered to a company called “Korea 615 Shenyang,” has strong links with North Korean and carries much of the output of the state media machine and some articles of its own.

It’s proved to be the most social-media aware of all sites carrying official news.

Uriminzokkiri operates a Twitter feed with over 13,000 followers, has racked up more than 5 million video views on YouTube, and posts images from North Korea to Flickr. The podcast is advertised alongside these on the site as it’s latest way to push North Korean propaganda to the world.

It hasn’t navigated the social media space without problems.

In 2010, it attempted to gain a Facebook following but Facebook twice deleted its account. The company said it zapped the account because it was created as a personal account and not a “page,” which is required of all organizations on the site.

Most recently it achieved short-lived success with two propaganda videos. One included footage from a video game of New York City in flames and the other used a soundtrack from a different game. After a brief burst of life, the two videos were the subject of YouTube takedown requests by the copyright owners, but not before they amassed thousands of views as a result of the publicity surrounding them.