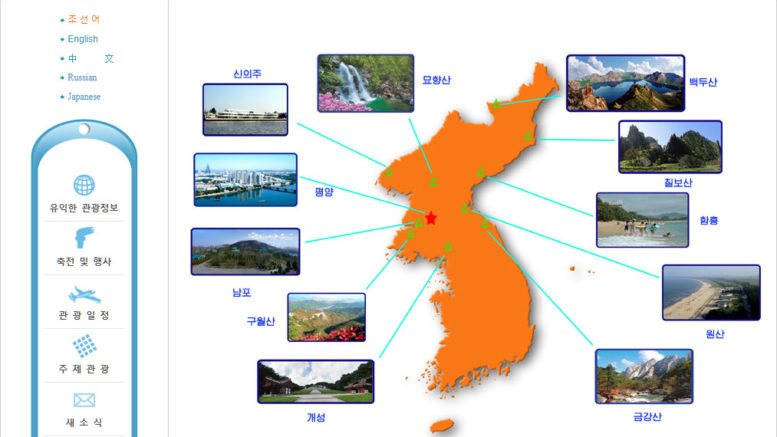 The site, called “DPR Korea Tour,” is available at tourismdprk.gov.kp and was first noted by a Chinese travel agency on Twitter user in mid-May, but doesn’t appear to have been noticed by anyone else. Doug Madory at Renesys alerted me to the site on Tuesday.

Like many North Korean sites it looks relatively old-fashioned and is multilingual: available in Korean, English, Chinese, Russian and Japanese.

The contents introduce the reader to different aspects of tourism in North Korea, introduce air and train routes to the country, information on how to get around Pyongyang and the different tour packages available. There are also sections on different cities across the country.

Reading the site, North Korea almost appears as a normal tourist destination. For example, a section on getting around in Pyongyang lists taxis and buses as convenient forms of transportation, but fails to mention that you’ll likely need permission from a guide before you jump in a taxi or hop on a bus to explore.

What the site doesn’t offer any way to book tours. The tourism authority doesn’t deal directly with travelers and there are no listings of the several foreign agencies that provide tourism services to North Korea.

Traveling to the country for fun has recently come under question again after the death of Otto Warmbier, the 22-year old American tourist who was arrested and imprisoned for attempting to steal a wall poster. Warmbier was suddenly released by the DPRK in mid-June while in a coma. He died days after being flown home to the United States.

The U.S. State Department “strongly warns” its citizens against travel to North Korea, citing a “serious risk of arrest and long-term detention under North Korea’s system of law enforcement.”

Update: The site isn’t as new as I thought. It was previously online as www.nta.gov.kp. No doubt the switch to a different domain name is to aid in Google searches, because people are more likely to look for DPRK Tourism than “NTA.”