The latest satellite imagery of North Korea’s Sohae Launch Facility shows what appears to be preparations for the planned mid-April launch of a Unha-3 rocket. The pictures, from GeoEye, show several vehicles in the launch pad area, apparently taking in part in work ahead of the launch. There has also been progress on several construction projects at the facility on North Korea’s western coast.

A previous satellite image of the launch pad, taken 10 days earlier, revealed no apparent activity at the launch pad but the latest image, below, shows several vehicles in the pad area. There also appears to be a vehicle parked next to one of the buildings situated to the south of the pad. These buildings are thought to be for fuel storage. 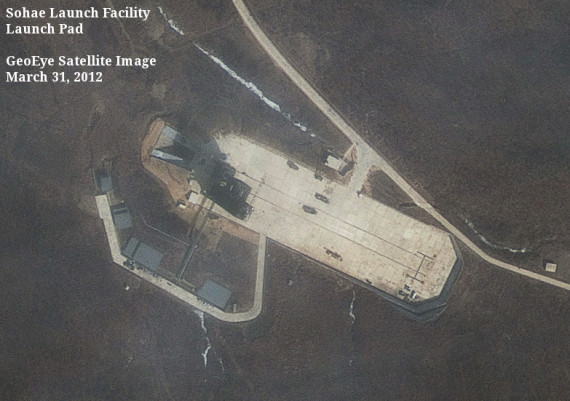 Other changes at the launch center are also apparent.

In previous images construction progress could be seen on a building near the main entrance. An image from February 27th showed the structure without a roof, while a picture from March 20th (taken through light cloud) showed the roof partially constructed. The roof has now been completed (click for larger view):

There’s also been an intriguing change to the area around a couple of the largest and most important buildings at the launch facility. We know they are important because they are the only ones with a second layer of security, in the form of a wall around them.

In previous pictures the areas appeared to be light in color, the same as the plain concrete that makes up the facility’s roads. Now they are black in color. Is this perhaps a sheet constructed to shield the area from such satellite images, something laid out over the concrete, or is it perhaps just wet? If you have any ideas, please add them in the comments.

The first is what’s believed to be the rocket assembly building: 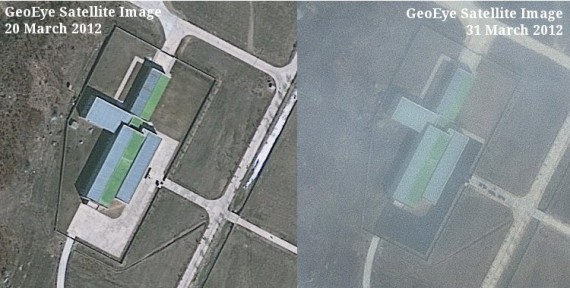 And there is this building, purpose unknown: