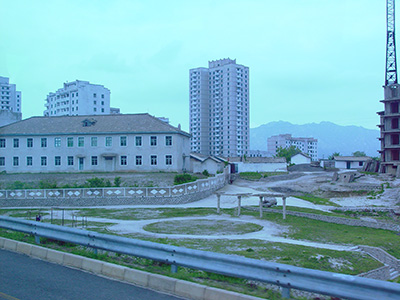 North Korea began construction this week on a new industrial zone in Kaesong that it hopes will attract high-tech companies.

The ground-breaking ceremony for the Kaesong Hi-Tech Industrial Park took place on Monday, less than a month after three foreign companies signed a deal with the government to work on design and construction of the park.

North Korea’s state media hasn’t said much about its plans for the zone since it announced it at an international conference on special economic zones that took place in Pyongyang in October.

But this week, state media reported on both the high-tech park and ground breaking.

“The park will have an IT center, hotel, dwelling houses, school and other buildings, as well as a power plant,” the Korean Central News Agency said in a report.

A month ago when the project was first disclosed, KCNA named three companies that had signed on to design and develop the park. They were Singapore’s Jurong Consultants, a building design and management company, and OKP Holdings, a construction and road maintenance company, and Hong Kong’s P&T Architects and Engineers.

This week, KCNA said the park is being built by an organization called the “Peace and Economy Development Group.” The group, the news agency said, is made up of companies from Hong Kong, Singapore, Australia, the Middle East and Africa.

It named two staff members of the group. Jang Su Nam, who was named a “representative,” and Heh Teck Siong, the general manager.

The exact location of the high-tech zone wasn’t disclosed in a Korean Central News Agency report, but it would make logistic sense for it to be within reach of the infrastructure built for the general-purpose Kaesong Industrial Complex, which opened in 2005.