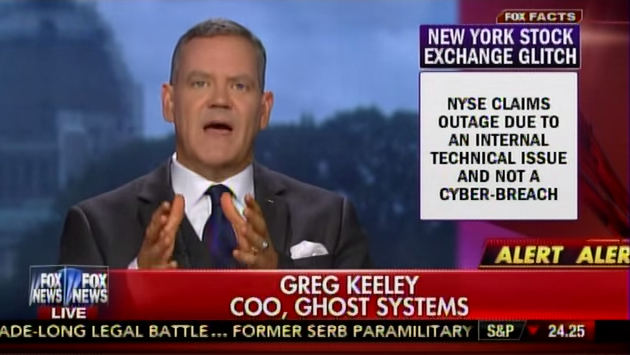 Gregory Keeley, COO of Ghost Systems, appears on Fox News Channel on July 8 to speak about a computer glitch that brought NYSE trading to a hald. (Photo: North Korea Tech)

It’s happened again … and it won’t be the last time.

The parody DPRK News Service Twitter account has fooled someone and made it onto national television in the U.S.

The subject in question was a couple of computer problems that hit United Airlines and the New York Stock Exchange on Wednesday morning. The United problem, which was blamed on a network router, caused a nationwide grounding of all flights that weren’t in the air while the NYSE glitch resulted in a 3.5-hour halt of trading.

The tweet in question came just about 24 minutes after trading was halted, just as news services were beginning to report the story. The timing was perfect because it was before the NYSE and White House both discounted a cyberattack as the cause of the problem.

Earlier in the morning, the account had also tweeted this:

The two tweets evidently made the rounds and one of them eventually got to Greg Keeley, chief operating officer of computer security company Ghost Systems. Keeley appeared on Fox News Channel to talk about the hacks.

The U.S. government had already said it was not the result of a cyberattack, but clearly that wasn’t as convincing as, say, a random Twitter account.

“For the stock exchange to go down like it is today, for the administration to come out so fast and say so vehemently and say ‘this is not an attack’, I think is a little bit disingenuous,” he said in the interview. “There’s been on Twitter, all day today, claims from North Korea that they are behind this attack and that’s very, very possible as are a number of other actors.”

Putting aside the issue of whether it’s possible or not, the tweet in question wasn’t from North Korea. It was from a Twitter user called @PopeHat.

Shepard Smith, a Fox News anchor, brought a little calm back to the discussion when he blasted people — including Mr Keeley — who were linking the attacks and sourcing information from Twitter.

“We cannot say that all of these things are related, that any sort of attack is underway because social media says that North Korea is claiming responsibility. That is not a source.”

One of the reasons the DPRK News Service keeps getting mistaken for an official account is that it looks pretty official.

The bio claims to be legit and it links to a legitimate KCNA website, albeit not the official one. The Japanese site is run by a DPRK-affiliated group in Tokyo. The KCNA site from Pyongyang is at www.kcna.kp.

Another reason it’s often believable is that it imitates the bombastic language of KCNA and that its sometimes ridiculous-looking tweets play right into people’s idea of North Korean propaganda.

But a look back through the tweets should be enough to indicate the account isn’t really official after all.

Kim Jong Un enjoys art performance, with songs such as "Our General Provides Appropriate Freedoms" and "Let Us Bake Pie for the Revolution"

Earlier this year, CNN also fell for news from the same account. And in 2014 it was Fox News, the Washington Post, Newsweek, Slate, Reuters …