A North Korean cooking website has appeared on the Internet more than two years after it was first reported to have launched.

The website of the Korean Association of Cooks offers hundreds of recipes in addition to an introduction to restaurants in North Korea and details of the cooking association.

State media first reported on its launch in March 2012 and again in January of 2013 but both times it wasn’t accessible from the Internet. It was assumed to be an internal site on the Kwangmyong nationwide intranet system accessible in libraries and schools.

But this week a site with the same domain “www.cooks.org.kp” name was discovered to be accessible from the Internet. The exact date it appeared is unclear but Doug Madory from Renesys, which specializes in Internet performance monitoring, said the domain name for the site appeared as far back as May 8 this year.

This is how KCNA described the domestic site:

“The homepage deals with common knowledge and theories on variety of dishes and how to cook them. It also offers such data as origins and anecdotes about dishes and global trend in cooking development. It has a distinctive catalogue for serving housewives’ convenience.”

“When a visitor chooses any food material in the catalogue, she can get detailed information about lists of dishes prepared with it and their cookery. The homepage contains multimedia on national and foreign dishes. Through homepage visitors can exchange their knowledge and views with each other and acquire a wide-ranging cooking.”

The HTML code for the page carries a date of May 2013. 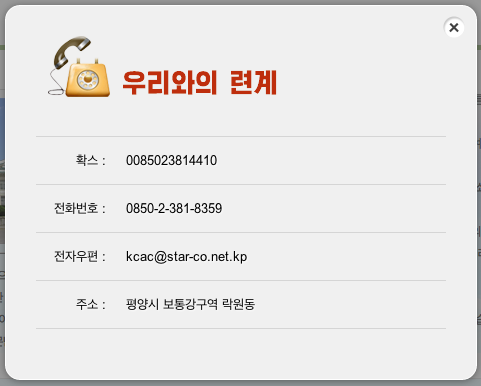