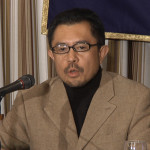 Today I had the chance to meet and hear Jiro Ishimaru of AsiaPress speak at the Foreign Correspondents’ Club of Japan. He was there to talk about how the Japanese news agency manages a small network of North Koreans who report from inside the country and smuggle out images and video.

The network is fascinating to hear about, as are Ishimaru’s stories about information flow both ways across the Chinese border.

To-date AsiaPress has published its reports in Korean and Japanese, but Ishimaru’s speech was timed to coincide with the publishing of the agency’s first book in English.

Called “Rimjin-gang,” the 495-page book is divided into four main sections dealing with the economy, the people, the Kim Jong-Il regime and state oppression.

It’s published by AsiaPress itself.

It can be ordered directly from the company and costs 9,000 yen, which is US$112 at the current exchange rate.

I covered the event for IDG and wrote a piece about the use of digital technology by AsiaPress. The digital door to North Korea has already opened.

I think that unless Kim Jong-Il’s administration takes a drastic step of completely banning all forms of digital media, there is no way it can stop the flow of information going into and out of North Korea.

I asked him if he thought this would happen.

I don’t think there is anyway the leaders can put a stop to this.

The event included an introduction by Bradley Martin, a noted North Korea expert, author and contributor to Global Post. This video includes the presentations of both Martin and Ishimaru and is in four parts. Ishimaru’s video presentation has not been included due to copyright restrictions and a request from Ishimaru.