The Philippines donated a laptop PC, a desktop computer and a printer to a school in Pyongyang last week, the country’s Department of Foreign Affairs said Wednesday.

The gift was handed to Pyongyang Kaeson Middle School by Philippines Foreign Affairs Undersecretary for Policy Erlinda F. Basilio. She was in in Pyongyang for scheduled talks with North Korea’s Foreign Ministry.

Established in August 1960 and located in Pyongyang’s Moranbong District, Pyongyang Kaeson Middle School was designated the Philippines-DPRK Friendship School on 23 August 2010, as part of the 10th anniversary of the establishment of diplomatic relations between the two countries. The school is run by nine officials and 79 teachers, and has a student population of 1,454.

The donation was undertaken in cooperation with the Philippine Embassy in Beijing and the PH-Korea Friendship Society, based in Pyongyang.

The Philippines and the DPRK established diplomatic relations on 12 July 2000. – Philippines’ Department of Foreign Affairs website. 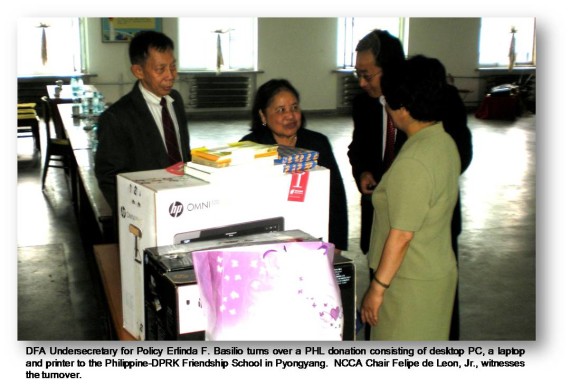