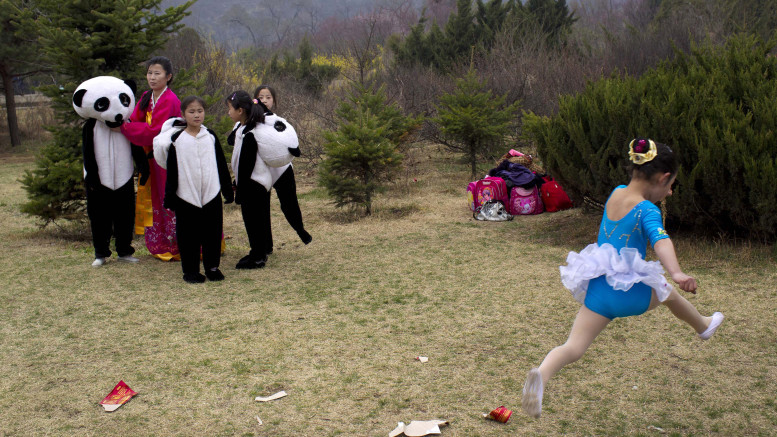 A joint photo exhibition being staged by The Associated Press and the Korean Central News Agency opened at New York’s The 8th Floor gallery this week.

The exhibition is one by-product of the AP’s opening of a news bureau in Pyongyang earlier this year and features 79 photographs, including shots from AP photographers, KCNA staffers and material from the KCNA archive.

The pictures are “designed to show what life is like in the Democratic People’s Republic of Korea,” the AP said in a news release.

They include the picture on the right, which is captioned: “A young North Korean dancer leaps by as girls put on panda bear costumes before performing at a Pyongyang park on April 15, 2011, the 99th anniversary of the late leader Kim Il Sung’s birthday.”

A delegation from KCNA traveled to New York to attend the opening of the exhibition. It included First Vice-Director General Kim Chang Gwang and was accompanied by AP officials including Senior Vice President Kathleen Carroll and Vice President John Daniszewski.

The KCNA story on the exhibition had a slightly different slant on things than AP:

On display at the exhibition under the theme “True Picture of Korea” are photos of undying revolutionary exploits President Kim Il Sung, leader Kim Jong Il and the dear respected Kim Jong Un performed for the building of a thriving nation, people’s happiness, independent and peaceful reunification of Korea and global independence. Photos also deal with their revolutionary activities and great personalities. — KCNA, March 16, 2012.

The exhibition will be open until April 13, which is two days before the 100th anniversary of the birth of Kim Il Sung. Visiting hours are Tuesday and Thursday 11 a.m.-6 p.m., Wednesday 11 a.m.-5 p.m.