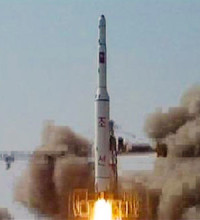 North Korea will launch a satellite in mid-April to mark the 100th anniversary of the birth of national founder Kim Il Sung, according to a Friday report on the state-run Korea Central News Agency.

The satellite will be called Kwangmyongsong-3 and will be launched between April 12 and April 16, the report said quoting a statement from the Korean Committee for Space Technology. A Unha-3 launched will be used.

Technicians plan to launch the satellite into a polar orbit, which means it won’t sit in one place in the sky like a TV satellite but will orbit the globe passing over multiple points. Exact details of the orbit or payload were not disclosed by KCNA, but the news agency said Kwangmyongsong-3 will be an “earth observation satellite.”

That’s sometimes code for spy satellite, but before getting too carried away it’s worth noting that the same phrase can also be used to describe scientific missions. Even if it is a spy mission, the resolution of the pictures is not likely to come close to anything launched by the U.S. or Japan.

The first Kwangmyongsong satellite was launched in September 1998 and the second, Kwangmyongsong-2, was launched on April 5, 2009. It carried “measuring devices and communications apparatuses,” according to a KCNA report from the time. The news agency said “It is sending to the earth the melodies of the immortal revolutionary paeans “Song of General Kim Il Sung” and “Song of General Kim Jong Il” and measured information at 470 MHz.”

Satellite monitors outside of the country failed to pick up any signals from the craft despite days of trying.

After successfully launching two experimental satellites, DPRK scientists and technicians have steadily conducted scientific researches to develop and utilize working satellites indispensable for the country’s economic development in line with the government’s policy for space development and peaceful use.

Through the researches they have made a drastic progress in the field of space science and technology and laid solid material and technological foundations for working satellite launches and operation. — KCNA, March 16, 2012.

We’ll have more on this in the coming days.