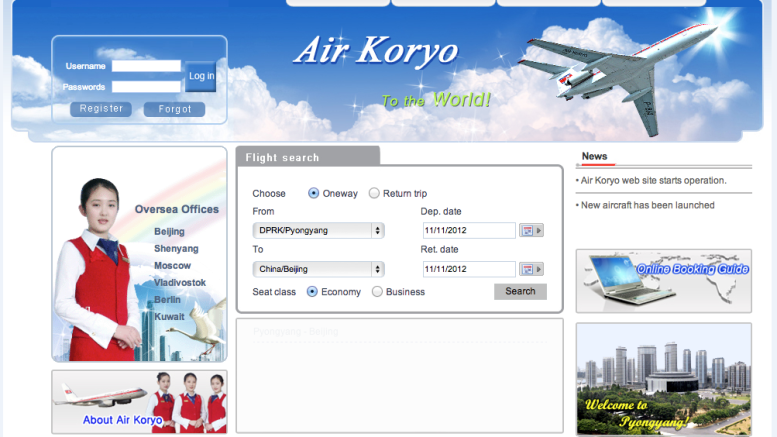 It’s been a couple of weeks since Air Koryo’s new web site make headlines. Much has been written about the site, but not much of substance.

A lot of the stories have noted the airline’s one-star rating on Skytrax, a web site which generates ranking from user reviews, although it should be noted there are plenty of positive reviews on the site. No one’s talking about the booking web site yet so there’s not much to go on, but it does have a couple of technical problems.

The site appears to be running on its own web server in Pyongyang. That’s interesting because there are only two other North Korean web sites, KCNA and the Rodong Sinmun, that have their own servers. All the rest share space on a single server.

The machine itself is running Red Hat Linux and the Apache web server software.

Aside all the basic information about the airline there’s a timetable that lists its flights to Beijing, Shenyang and Vladivostok.

That’s an offer I couldn’t refuse, but I didn’t want to give AirKoryo my personal details so I made some up. The registration had some required details — for example, a phone number is needed but a fax is optional — but once completed the account was immediately established.

There was no confirmation e-mail, but I was logged in!

This brought a couple of extra menu options: My profile, which allows the entered information to be changed, and a logout button.

And so on to booking. I said I wanted to fly from Beijing to Pyongyang, departing on 10 November, 2012, and returning on 29 November, 2012. The flights were found in the database and I selected one.

A page requesting my personal information came up, already filled in with the account details I entered. There were also some options, such as the chance to order a vegetarian meal and extra seats. Passengers can book extra seats for a variety of purposes. The most mundane is for a pet, but the list also includes musical instruments, jewelry (an extra seat for jewelry?), a mysterious named “blackbox” (hopefully not the flight recorder) and — my personal favorite — for being “fat.”

But, after completing the page, a problem:

It’s a much nicer apology that United gives me, but there’s clearly a problem with some of the site code. Despite searching for flights in 2012, the web site returned an error for 1970.

Programmers will recognize the significance of this date. January 1, 1970, is the base time in operating systems like Windows and Linux and software keeps count of seconds since that date, so rather than a random old date it’s likely due to a problem in the code behind the site.

The problem meant I couldn’t proceed any further.

I closed Chrome and tried the same purchase with Safari, and this time it worked. 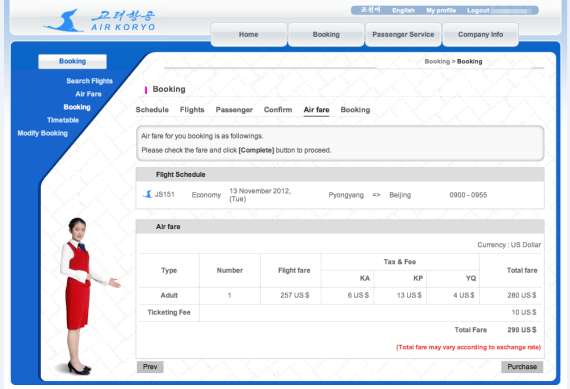 A single flight from Pyongyang to Beijing for US$290.

So, success then? Not quite.

But after I aborted the page loading, I found I had a booking. Unfortunately, it’s not possible to pay for the tickets online.

Now, I just need to find a button to cancel the booking …

Unfortunately, there wasn’t much else to note about the website, except perhaps that it doesn’t use SSL. Secure Sockets Layer is a basic web security protocol now used by almost all sites that require a password to log in.

The lack of encryption should be a red flag to anyone using the website to actually buy a ticket. If none is used on the payment page, it means anyone with access to your connection, from Air Koryo or the network admins in Pyongyang all the way back to the kid in the corner of the coffee shop sharing your WiFi network, might be able to see you personal details. For this reason alone, proceed with caution!