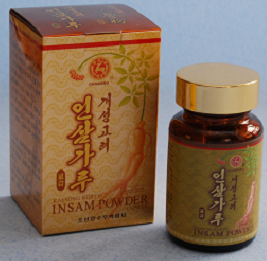 I was intrigued at how WIPO had found these inventors, so I contacted the Geneva-based organization to find out.

KCNA reported the winners as: 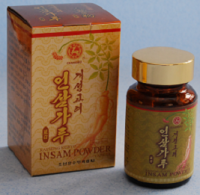 The first four on the list received their awards for “the construction of monuments by completing the three dimensional curve space stoning method” and the latter three for “producing Kaesong Koryo Insam powder and inventing its production method,” said KCNA.

The powder (image, right) is used as an ingredient in food and helps increase immunity and treat diseases, the news agency added. Korea Jangsu Trading Corp. sells it in China.

The awards were made as part of a long-standing WIPO program in which the Organization’s 186 member states submit requests for awards, a WIPO spokesman told me. The DPRK had been a WIPO member since 1974.

The national intellectual property offices of each state select winners and make the submissions to WIPO at least three months prior to the awards event and WIPO evaluates the requests and responds to them, he said.

“To qualify for an award, nominees should have either obtained a patent for their invention or filed for one,” said the spokesman.

By way of reference, WIPO received requests from 40 member states in 2012 and distributed 220 awards in total.

The awards given last week were in recognition of inventions presented at the 12th National Invention and New Technology Exhibition, which took place from August 27 to September 3, 2012 in Pyongyang.