A Facebook page that claimed to be the official home of North’s Korea’s main national TV channel, Korean Central Television, has disappeared.

The page appeared to have been around for at least a month and content included links to KCTV news bulletins on the YouTube channel of the China-based Uriminzokkiri website, photos and stories from the government’s Korean Central News Agency (KCNA) and some “behind the scenes” pictures from the TV station.

It was written as if it was being run from within the TV station in Pyongyang — something that appears to have fooled several major international news agencies — but a series of inconsistencies in the content made it much more likely to be the work of a North Korean fan in the west.

Early this week, after those inconsistencies were highlighted on NorthKoreaTech and South Korea’s National Police Agency said it was looking into blocking the page, the Facebook account went silent. The account was deleted by its owner, Facebook told NorthKoreaTech.

A lot of the media attention on the page focused on its livestreaming of Korean Central Television but, as noted here earlier, the two livestreams offered by the site weren’t actually original.

They were simply embedded versions of two streams that remain available.

The first is being carried by Ustream, a U.S.-based video streaming site, and appears to be provided from Japan by the General Association of Korean Residents in Japan (Chosen Soren). The second comes from Unification Broadcasting, a Seoul-based defector-run site that analyzes media coverage on both sides of the Korean border. 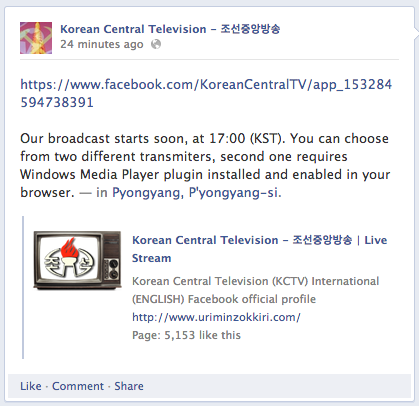 A Facebook posting claiming to be from Korean Central Television in Pyongyang advertises two livestreams of its daily program.

3 Comments on "KCTV Facebook page deleted, but streams live on"