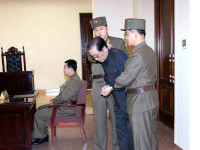 The reports, in English, are reproduced below.

The first report ran on December 9 and covered the meeting of the political bureau of the central committee of the Worker’s Party of Korea, at which Jang was accused of a series of crimes against the state and led away by soldiers.

The report runs to 5 minutes.

The second report came two days later and was much shorter at just 18 seconds.

The final report, on December 13, covered the military trial and Jang’s execution and ran to six and a half minutes.

It ended with the same chilling line as KCNA’s English-language story.

The decision was immediately executed.

The recordings are courtesy of the World Radio Network, which until this weekend was recording Voice of Korea’s satellite broadcasts and making them available online. That service was discontinued on December 15 as part of the reorganization of the London-based group’s operations.