Bitcoin has arrived in North Korea … sort of.

A tourist on a trip to Pyongyang used the Koryolink mobile Internet service to make what is supposedly the first transaction in the country using the virtual currency. 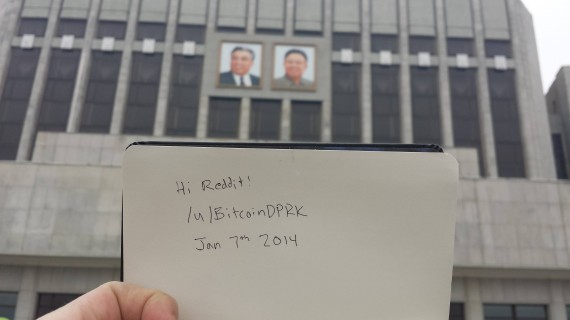 An image posted to Reddit by user “BitcoinDPRK” from Pyongyang.

But it wasn’t a payment to anyone in the DPRK.

The US$100 payment (just under 104 milliBitcoins) was sent to Seans Outpost, a homeless outreach center in Florida that has been raising money via Bitcoin.

The user posted a picture to prove their presence in Pyongyang and explained they were part of the Koryo Tours trip to see Dennis Rodman’s basketball game.

“What better use case of Bitcoin than to send money internationally from what is probably the most restrictive country in the world?,” the user wrote. “And what better recipient of that money than /u/SeansOutpost? With Bitcoin, borders mean nothing!”

The donation was later confirmed by Seans Outpost.

Bitcoin’s decentralized nature means that it exists outside of the global financial system and that has some governments concerned. Payments made with Bitcoins are almost impossible to track making it an attractive option for people involved in illegal activities, but the currency has been fast catching on legitimate purposes too.

User BitcoinDPRK said they have also been giving offline wallets with a few milliBitcoins to the Korean guides on the tour.