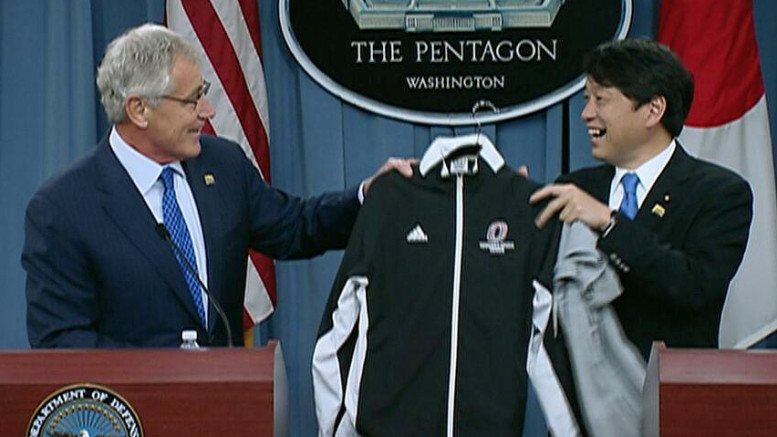 Japanese Minister of Defense Itsunori Onodera and U.S. Secretary of Defense Chuck Hagel sure are getting along well.

The two met with reporters at The Pentagon on Friday afternoon as part of Onodera’s current visit to the U.S. and spent the first five minutes of their 25-minute briefing talking about Onodera’s trip to Hagel’s home state of Nebraska and his alma-mater, the University of Nebraska. Hagel then spoke of a pair of waterproof headphones he had received from Onodera at a previous meeting (Sony, as Onodera later mentioned) and gave him a University of Nebraska tennis shirt.

It was enough to make the Wall Street Journal remark on the growing bromance between the two. 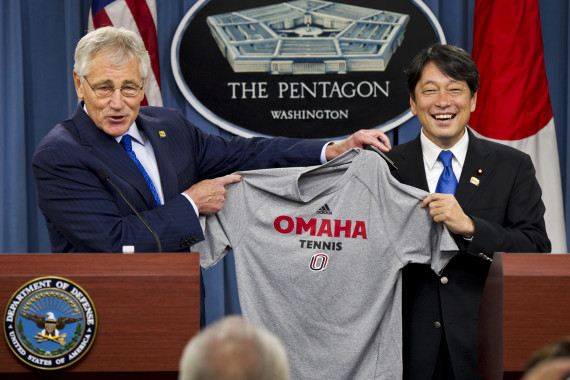 Was this a clever ploy to limit the time reporters got to ask questions? Possibly, but as the Journal notes, the two have met six times now – something quite remarkable considering the recent pace at which Japanese cabinets have been cycled.

North Korea came up, of course. Onodera was the first to bring it up. speaking through an interpreter, he said brought Hagel up to date “on relations with North Korea” and the abductee issue.

It might not have gotten a second mention had it not been for a reporter’s question — one of only four that was asked before the event ended.

Hagel was asked about Japan’s recent engagement with North Korea on the abduction issue and Japan’s plans to lift some of its sanctions towards the country.

“We understand that there are humanitarian issues involved for the Japanese people,” Hagel said. “But Minister Onodera made clear, as well as we have been told by the Japanese government, that North Korea’s nuclear threats, missile threats, are still a threat to all of us. And that doesn’t change.”