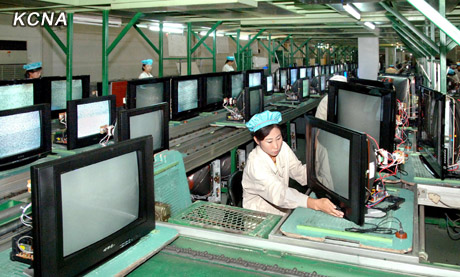 Taedonggang TV factory is shown in this image carried by Korean Central News Agency on September 20, 2011.

The current issue of Foreign Trade has a profile of Taedonggang TV factory, which sits on the outskirts of Pyongyang and makes a number of TV sets carrying several North Korean brand names, according to the magazine.

“The factory has several workshops for magnetic substances, metal processing, plating of printed circuit, moulding and coiling and a branch factory for assembly of color TVs,” the magazine reports. “Its daily output is thousand of sets.”

Through the profile in Foreign Trade, the country is promoting the TVs sold through Korea Samgwang Trading Corp. 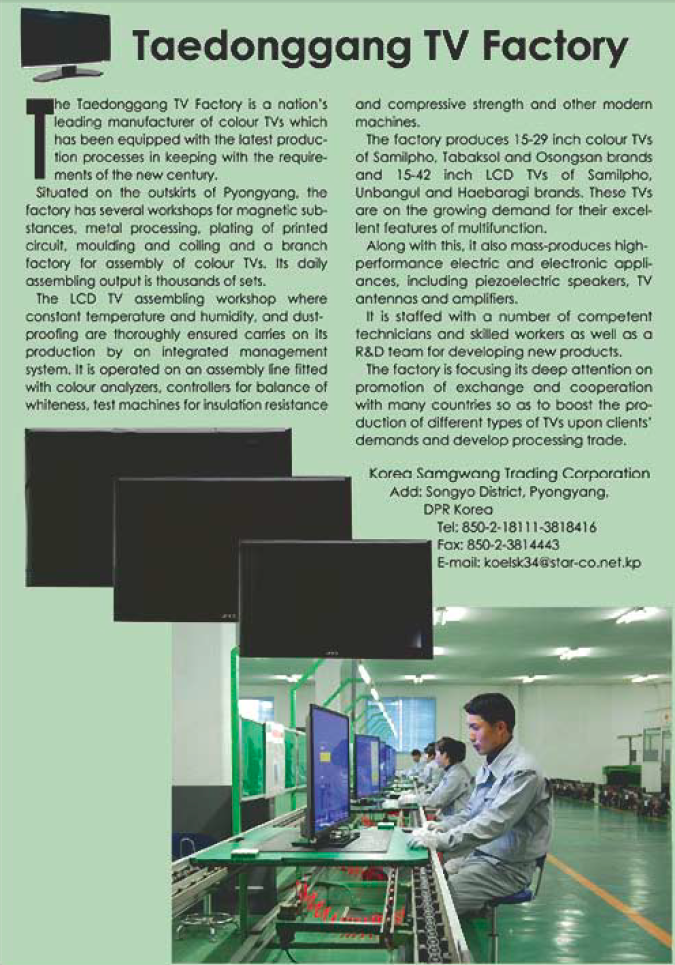 The factory has been around since September 1979, when the Korean Central News Agency first mentioned its existence.

“A large modern television factory has been built in Pyongyang,” the agency said on September 14.

“The Taedonggang television factory has over 10 workshops including the assembling, mechanical processing, outer case and mechanical and maintenance shops for the production of television sets, the production processes are serialized. There are in the factory 15 research rooms including the colour television and electronic appliance research rooms. It has its own broadcasting facility sending standard transmissions for the regulation of the television sets produced. The factory, with a floor space of tens of thousands of square metres, has scores of main production buildings and auxiliary production buildings, and cultural and welfare service facilities.”

“Its construction had been estimated to take 5-7 years in view of its scale and equipment. But the constructors waged the “speed campaign” and successfully built it in less than 1.5 years. The factory has started producing Pyongyang model and Taedonggang model television sets.”

While its completion was reported in 1979, the official opening doesn’t appear to have taken place until September 1980, when Xinhua noted the factory was built with Romanian assistance.

In April 2000, as South Korea’s sunshine policy was gaining momentum, the factory began producing TV sets for LG. Plans were drawn up for Taedonggang TV factory to produce up to 15,000 20-inch TVs for the South Korean company.

Taedonggang TV factory is shown in this image carried by Korean Central News Agency on September 20, 2011.

The factory was most recently in the news on September 20, 2011, when it was visited by Choe Yong Rim, who was then premier of the DPRK.

“He organized the work to produce more quality electronics goods needed for better material and cultural life of the people,” KCNA reported at the time.