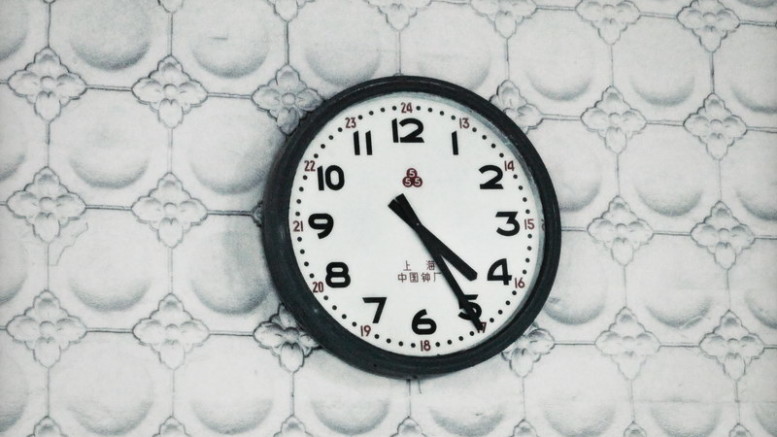 A clock on the Pyongyang subway (Photo: Roamme/Flickr/CC-by-SA-2.0)

North Korea will next week take the unusual step of creating its own time zone by shifting clocks back by 30 minutes.

Pyongyang Time is being created by a decree of the Supreme People’s Assembly that was issued on Wednesday but wasn’t reported until Friday by the Korean Central News Agency.

The decree said the decision to adopt the new time zone, which puts the DPRK out of step with its neighbors, is intended to mark the 70th anniversary of Korea’s liberation from Japan on August 15th.

This is what the decree says:

Firstly, the time at 127 degrees 30 minutes east longitude or 30 minutes later than the present one shall be fixed as the standard time of the DPRK and called Pyongyang time.

After the adoption of Pyongyang Time, North Korea will be 30 minutes behind South Korea and Japan and 30 minutes ahead of China.

Setting a new time zone isn’t as easy as literally turning back (or forward) the clocks, but in North Korea it might be easier than elsewhere.

Accurate time keeping has become more and more important as computers have taken a bigger role in an increasingly international world. A difference of even a second can throw interconnected computer systems off-sync, so switching time zones or changing them typically requires international collaboration.

As North Korea is relatively isolated and isn’t heavily integrated into the world trade system, the adoption of Pyongyang Time comes with fewer risks.

But it remains to be seen how it will affect North Korean activities that connect with the rest of the world, such as the timing of flights on Air Koryo or foreign radio broadcasts by Voice of Korea.