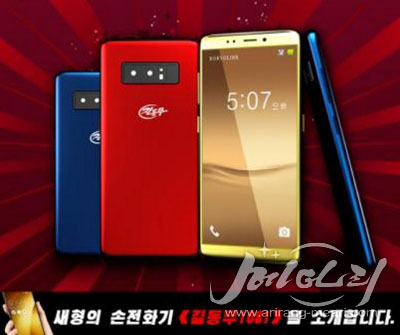 The Kiltongmu smartphone as shown in an Arirang Meari report on September 9, 2019.

North Korea’s latest smartphone is the Kimtongmu (길동무), state-run Arirang Meari reported on Monday. The name can be translated to “companion,” which almost perfectly describes the relationship between almost any person and their smartphone these days.

Few details about the device were included in the report although it did carry a photo of the phone. It doesn’t look any different from the hundreds of black, rectangular smartphones already available although NK News noted some similarities with the Samsung Note 8 that was launched in 2017.

The Kiltongmu smartphone as shown in an Arirang Meari report on September 9, 2019.

The report claimed that the phone was developed and made by Kwangya Trading Company (광야무역회사의), which is a company that has never appeared in state media until this point. It’s also not one of the three companies that have been attributed to-date with North Korea’s other smartphones.

While the report claims the company developed the phone, it is likely that the phone hardware was sourced from a Chinese OEM maker the the company customized it with a North Korean version of Android and domestically-developed apps and security features.

Features are said to include a fingerprint sensor, face unlocking and handwriting input. It comes loaded with 30 dictionaries, apps and entertainment, the report said.

While the phone may take some design elements from the Note 8 it is missing at least one major feature: the screen on the Kiltongmu appears to be flat and not curved like the Note 8. The article also did not mention a stylus, which is a common feature on the Samsung Note line. There are several phones from China that look like the Note 8, but so far I haven’t been able to come up with one that’s a perfect match for the Kiltongmu.