Two radio stations operated by South Korea’s National Intelligence Service have slightly moved some of their broadcast frequencies to escape North Korean jamming. The stations, Voice of the People and Echo of Hope, are on the air daily broadcasting a constant stream of news and information to an audience in North Korea.

For years the North Korean authorities have attempted to stop citizens listening to the stations by jamming their reception – broadcasting heavy noise on the same frequency so the South Korean stations become unlistenable.

Here’s a recording of the North Korean jamming signal that is usually broadcast on top of the South Korean station:

On October 1, radio monitor Ron Howard alerted me that both stations each shifted three of their broadcast frequencies downwards by 5 kHz so the channels can currently be heard without jamming. The new frequencies are close enough that anyone tuning into the old one will hear the station and be able to slightly readjust for clear reception.

Here’s what Voice of the People sounds like now, without jamming:

The screenshot below shows the South Korean radio station signal on the left (the stronger, red line) and the North Korean jamming in the right (the weaker, yellow line). Until the frequency change, these were on top of each other. 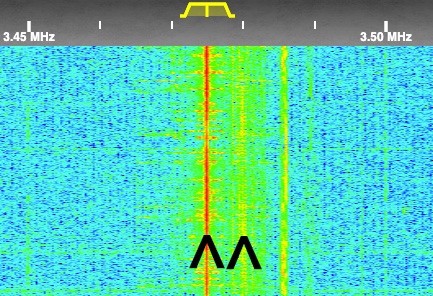 North Korea hasn’t responded to the changes yet and continues to operate its jamming transmitters on their old frequencies, which means they’re sucking up valuable electricity and broadcasting over static.

Despite being abandoned by most of the world in favor of satellite and Internet broadcasting, shortwave radio remains a vital technology for groups trying to get uncensored information into North Korea.

A handful of stations target North Korea with dedicated programming including Voice of America, Radio Free Asia, KBS and the BBC. During the nighttime, domestic South Korean AM radio stations can also be heard in North Korea.

Is this a South Korean propaganda radio station?