Both of the major private satellite imagery providers, GeoEye and DigitalGlobe, have captured images of the North Korean satellite launch facility in the last month and both images show changes from earlier this year.

Earlier this year, satellite images from the companies were one of the first indications that North Korea was preparing for a rocket launch and now that talk has restarted. It’s in part due to DigitalGlobe’s own analysis of its latest image and an article on 38 North that looks at an image from September.

So, what do the images show is happening at Sohae, also known as Tongchang-ri launch pad?

First, let’s take a look at the GeoEye image, which was captured on November 2. (Click on the images to launch larger versions)

One of the biggest changes is at what is thought to be the railway to road transfer point, where incoming rocket parts and equipment are transferred from railway wagons to trucks. There appear to be two new structures built between the railway and what look like rectangular holes or water pools. (Anyone care to guess or explain what they are?) There’s also something new along the opposite edge of the platform. Perhaps a monument?

Next, the new access road along a hillside overlooking the main launch pad — first noted in the 38 North analysis — can be easily seen. It cuts quite a wide path through the woodland. 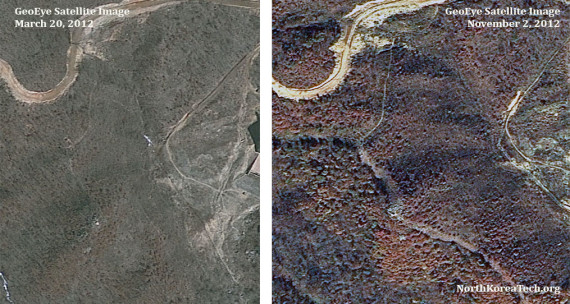 And here’s a look at the launch pad itself, although there doesn’t appear to be much different from earlier images. 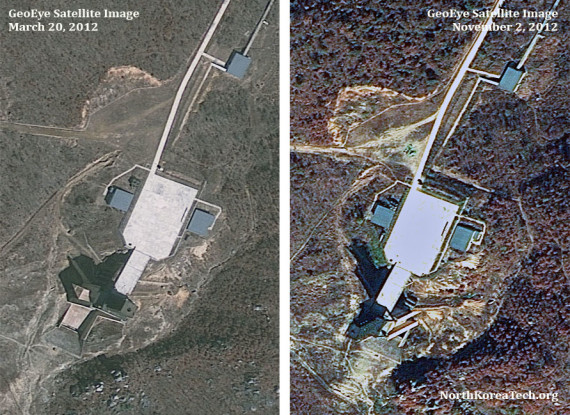 Elsewhere, a few small buildings and huts appear to have been demolished or had their roofs removed. Take a close look at some of the buildings in these images and you’ll see some changes. These are some of the more minor buildings at the launch facility. 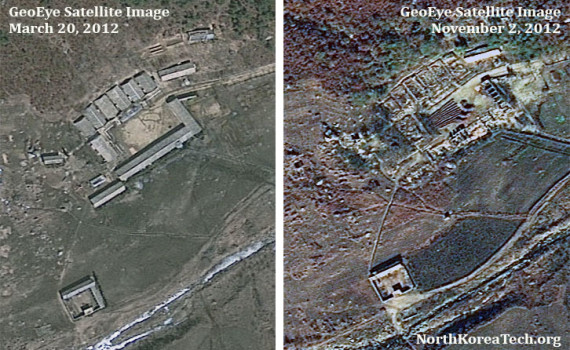 The latest imagery comes from DigitalGlobe, which has released a picture captured less than a week ago on November 23.

In this picture we can see a new building has been constructed to the rear of the parking lot at the launch observation building. It looks like there’s something new on the roof, too. 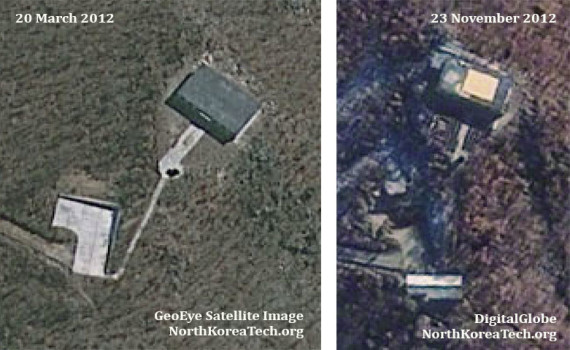 But, interesting as all these new buildings are, they are not what’s causing the buzz.

In the worlds of DigitalGlobe:

This satellite image from November 23, 2012, shows a marked increase in activity at North Korea’s Sohae (West Sea) Satellite Launch Station. This activity is consistent with launch preparations as witnessed prior to the failed April 13, 2012 launch of the Unha 3 (i.e., Universe or Galaxy 3) space launch vehicle (SLV) carrying the Kwangmyongsong 3 (i.e., Bright Lodestar 3). Given the observed level of activity noted of a new tent, trucks, people and numerous portable fuel/oxidizer tanks, should North Korea desire- it could possibly conduct its fifth satellite launch event during the next three weeks (e.g., by mid-Decemember 2012)

Here’s the latest image of the launch pad: 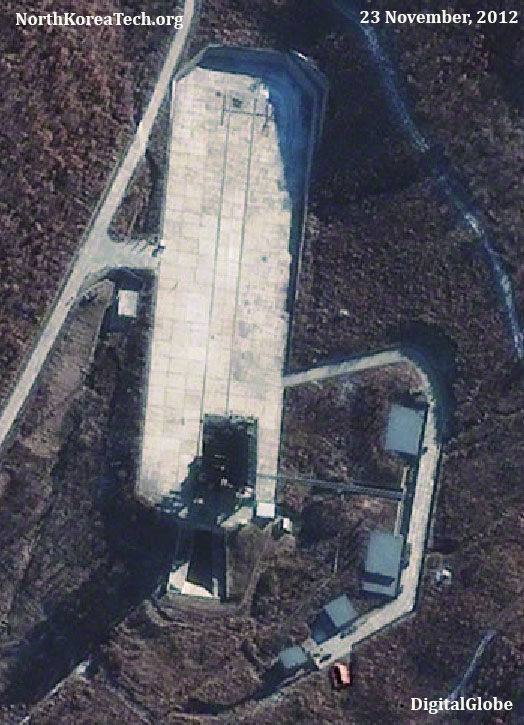 You need to take a close look to see differences, but there are some compared with previous pictures. Click to launch an enlarged version of the four images.

In the March images numerous objects, previously reported to be oxidizer tanks, can be see on the roadway. These appear to be back in the November images from GeoEye and DigitalGlobe, although note their position has changed over the course of a few weeks.

DigitalGlobe said it had identified “new tent, trucks, people and numerous portable fuel/oxidizer tanks.” Could the new tent be the orange-colored object in the lower portion of the November 23 image? A space had been cut away in the vegetation in early November but the area was empty.

And finally, what could be one or two trucks on a road on the western side of the facility. 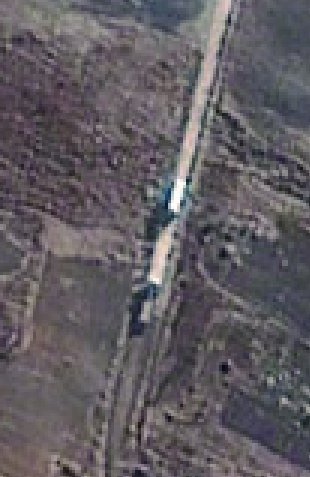 I’m not an expert in satellite imagery analysis, so I welcome any comments or suggestions as to what else these images show.