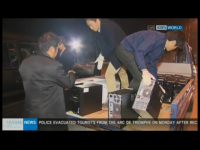 No official announcement of the project had been made, but on Thursday the state-run Korean Central News Agency said several foreign companies would be investing on such a park.

The companies listed in the brief news article include Singapore’s Jurong Consultants, a building design and management company, and OKP Holdings, a construction and road maintenance company, and Hong Kong’s P&T Architects and Engineers.

To-date, none of the companies have the project listed on their websites and attempts to contact them for information were unsuccessful.

“The consortium agreed with the DPRK’s related organs on collaboration in building the Kaesong Hi-Tech Industrial Park and Highway Toll Road from Capital Airport to Pyongyang City,” KCNA said. “The projects will soon begin.”

The announcement by KCNA comes as an international conference on special economic zones was wrapping up in Pyongyang.

“The conference takes place at a time when the DPRK is paying deep attention to developing special economic zones in local areas, as the Rason Economic and Trade Zone,” KCNA quoted Ri Chol Sok, vice-president of KEDA, as saying.

A high-tech industrial park at Kaesong would appear to be an attempt to bring some of South Korea’s tech manufacturing industry to the city, which lies just over the border and was a former capital of Korea.

LG Display, the flat-panel display manufacturer associated with LG Electronics, has one of the world’s biggest LCD (liquid crystal display) factories just south of the border in Paju so high-tech manufacturing in the border zone isn’t unheard of.

However, the North Korean government might find it difficult to attract companies given the summer’s problems at the existing Kaesong Industrial Park. The park has only just begun operating again after being closed for five months as the result of North Korea’s withdraw of workers in May.

Competition in the high-tech industry is cut throat and companies cannot typically afford a single day’s shutdown without incurring sizable losses. A multi-month shutdown could spell disaster for a company’s market share.