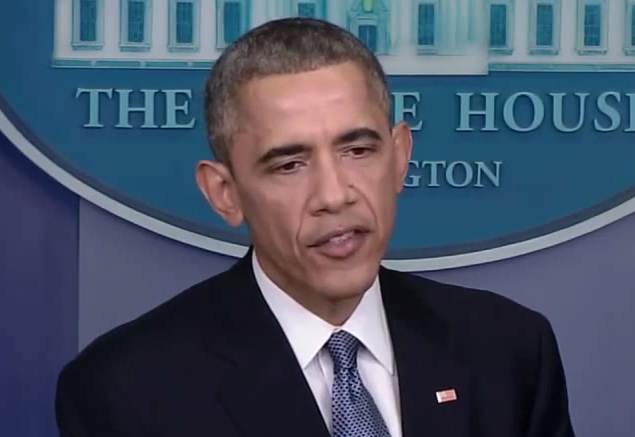 Hours after the FBI fingered North Korea as responsible for the cyber attack on Sony, President Obama spoke at his year-end news conference. The first question asked was regarding the Sony hack and his response to the news of North Korea’s involvement. The president spoke forcefully and strongly about Sony’s decision to pull the movie, what it means for freedom and speech and then onto broader cyberspace themes.

I’ve reproduced some of the key quotes below, and here’s the full video:

“Sony is a corporation, it suffered significant damage, there were threats against its employees. I am sympathetic to the concerns that they faced. Having said all that, yes, I think they made a mistake.”

“In this inter-connected digital world, there are going to be opportunities for hackers to engage in cyber assaults both in the private sector and in the public sector. Now, our first order of business is making sure we do everything to harden sites and prevent those kinds of attacks from taking place.”

On the impact of Sony’s decision:

“We cannot have a society in which some dictator someplace can start imposing censorship here in the United States. Because if somebody is able to intimidate folks out of releasing a satirical movie, imagine what they start doing when they see a documentary they don’t like or news reports that they don’t like. Or even worse, imagine if producers and distributors start engaging in self-censorship because they don’t want to offend the sensibilities of somebody whose sensibilities probably need to be offended.”

And on the need for international discussions and rules on cyberspace:

“More broadly, this points to the need for us to work with the international community to start setting up some very clear rules of the road in terms of how the Internet and cyber operates. Right now it’s sort of a wild west.”

1 Comment on "Obama on hack: dictators can’t impose censorship in the U.S."