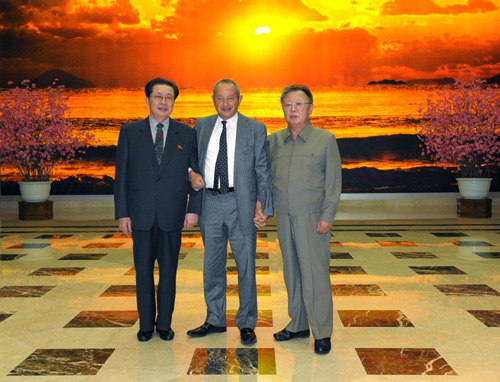 The CEO of Egypt’s Orascom Telecom was given a dinner in his honor hosted by Kim Jong Il on Sunday night, KCNA reported on Monday. (Scroll down for updates)

The report said Kim, “warmly welcomed his DPRK visit taking place at a time when Orascom?s investment is making successful progress in different fields of the DPRK, including telecommunications. He had a cordial talk with him.”

[Read my report at Network World]

A reception with Kim Jong Il is something of a rarity for visiting businessmen and even politicians, but Sawiris has made several significant investments in the country.

Most notable is Cheo Technology, a joint-venture that operates North Korea’s only 3G cellular network. Cheo, in which Orascom holds 75 percent, launched 3G service two years ago and has over 300,000 subscribers, according to company data.

KCNA has published two photographs of Sawiris with Kim Jong Il. The first shows him sitting opposite Kim Jong Il at a conference table. The second shows Sawiris standing between Kim Jong Il and Jang Song Thaek, who is Vice Chairmen of the National Defense Commission and Kim Jong Il’s brother-in-law.

The picture is perhaps most surprising for the pose. Sawiris has his arm locked with Jang and is holding hands with Kim. 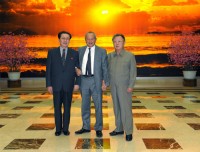 The meeting between the two was the top news item on KCBS domestic radio at 10am local time on Jan. 24, according to BBC Monitoring Service.

Here’s the report on the visit from the evening news on KRT.