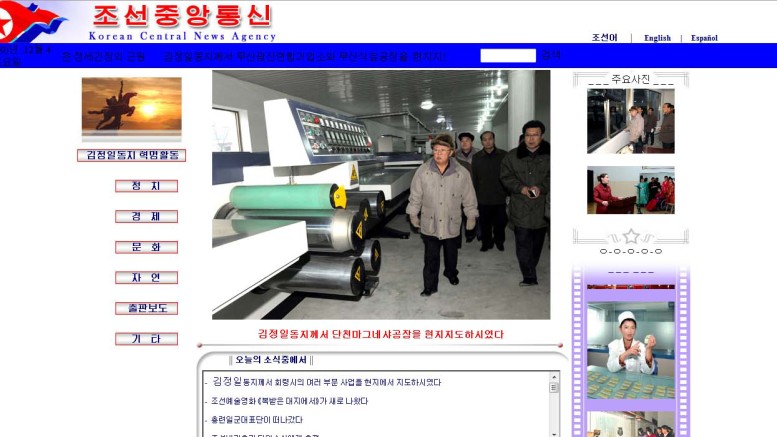 Korea Central News Agency confirmed for the first time on Saturday that a recently launched website carrying its news is the agency’s official site.

KCNA news has been available on the Internet for several years via a handful of sites, but all have been run by third parties outside the country.

On Saturday, the agency posted a notice in its daily news mentioning the site:

“The Korean Central News Agency would like to express thanks to all the visitors to its website. The KCNA has the honor to inform the visitors that its website address has been changed: IP address 175.45.176.58.”

North Korea Tech reported on the IP address change on Friday. What we didn’t spot then, but was mentioned in the notice, was a new domain name for the website. It can now be accessed via the memorable http://www.kcna.kp . The notice was signed by the “Editorial Department” of KCNA and dated Jan. 22, 2011.

The new site first appeared in October last year from within North Korea Internet space. At the time it had no domain name and was available via a simple numeric address.

Video news and pages in Japanese were added on Jan. 1 this year and a week later it became accessible via the address www.star.edu.kp. That address is still listed on the site as of Saturday, but no longer works.

The launch of the new domain is a further sign of North Korea’s growing sophistication with the Internet. The country has launched three websites in the last few months, and signs point to continued expansion of its online efforts.

To-date the work appears solely aimed at overseas audiences. There has been no indication that North Korea is opening up the global Internet to its own citizens.