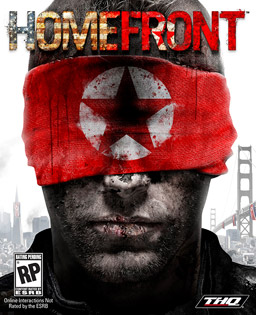 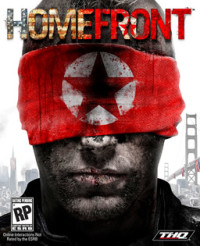 The year is 2027 and the Greater Korean Federation, a North Korea-controlled bloc of Asian nations, has been occupying San Francisco for two years. This is the fictional — and many would say unlikely — setting for Homefront, a video game that hits U.S. shelves on March 15.

The game pits the player, a member of the U.S. resistance, against Korean Federation forces in the battle to liberate San Francisco. It’s developed by Kaos Studios, and was written by John Milius, who is best known for Apocalypse Now and Red Dawn.

“Homefront is set ten years after the economic collapse of the United States and follows the American Civilian Resistance as they fight to reclaim their homeland from an oppressive North Korean occupation,” Kaos said.

I first came across the game a week ago, when news reports said the Japanese release would be modified to comply with local guidelines on the use of real names in games.

Repeated attempts to get confirmation from Kaos and publisher THQ on those reports have been unsuccessful. (Update: See below)

Delving into the back story for the game, which Kaos calls “a terrifyingly plausible near-future world,” I found the game contains plenty more that might surprise or anger Asian gamers.

The game is rooted in history and the 2010 sinking of the South Korean frigate, the Cheonan. A year later, the U.S. President appears at the United Nations to demand sanctions against North Korea following a nuclear test.

In 2012, Kim Jong Il dies and North Korea is thrown into mourning. His son, Kim Jong Un, takes over as leader.

When the game was first announced in 2009 and the first trailers produced, the world was still wondering what Kim Jong Un looked like. In the original trailer he’s played by an actor that looks like he might have come straight from a South Korean TV drama, but the video has since been updated to someone a little closer to the real Kim.

The game’s story has the world cautiously welcoming Kim Jong Un (seen below played by the original actor). In a speech to the U.N. he pledges to reunite the two Koreas.

By 2015, the economy is crumbling in the U.S. Gas prices are close to $20 per gallon, and the population is beginning to panic as civil unrest spreads across the country. Then, in 2017, North Korea attacks a Japanese nuclear power station and Japan surrenders under threat of annihilation.

The U.S. is in turmoil by 2022. Martial law has been declared and the government has frozen bank accounts to prevent a collapse of the entire U.S. financial system. By 2024, the Greater Korean Republic had invaded and annexed a large portion of Asia including the Philippines, Indonesia, Singapore, Thailand, Vietnam, Myanmar, Laos, Cambodia and Malaysia.

A new Korean satellite is launched into space to “bring a message of peace to the entire world.” Instead, it sends an EMP (electo-magnetic pulse) blast that knocks out electronics across the U.S., bringing the country to its knees.

This sets the scene for Korea’s next two moves… the invasion of Hawaii and occupation of San Francisco.

And so the game begins.

The game makers clearly hope to strike a cord of patriotism among American gamers and the game carries the tag line “Home is where the war is.”

“Homefront isn’t about going to war on the other side of the world or battling aliens from another planet; it’s about fighting foreign invaders in your own backyard and defending your right to live,” the company said in a news release.

It appears in the U.S. on March 15, in Australia on March 17, in Europe on March 18, and in Japan on April 14. A wider Asian launch has not been announced. It will be available for the PlayStation 3, XBox 360 and PC.

There’s a book coming too.