The deals, with The Associated Press and Reuters, give each agency the ability to redistribute KCNA footage to TV stations around the world as part of their video news service. Such deals are common and both AP Television News and Reuters have many to supplement their own footage and get quick access to breaking news.

The difficulties of getting into Pyongyang to shoot any video, let alone breaking news, present unique problems for all journalists.

AP announced its deal on June 29th, apparently as an exclusive:

The contract signed this week designates AP as the exclusive distributor of contemporary and historic video from KCNA’s archive, providing a new source of video content from North Korea to AP’s members and customers around the world. — AP news release, June 29, 2011

But, not to be outdone, Reuters followed on July 11 with its own deal:

Reuters today announced an expansion of its relationship with the Democratic People’s Republic of Korea’s Central News Agency (KCNA).

The agreement with KCNA covers both breaking and feature news video, and marks a significant expansion by Reuters in delivering news from one of the world’s most important datelines. – Reuters news release, July 11, 2011

It appears Reuters is getting the freshest video from KCNA, perhaps shot exclusively for the agency, while APTN gets access to archive footage.

Both news agencies already distribute footage from state-run television KRT and APTN is unique among western news agencies in having a bureau in Pyongyang.

They’re not the only foreign TV crew in Pyongyang. China’s CCTV has a bureau in the city and recently started distributing video from North Korea at no cost to broadcasters through its News Content service.

For KCNA this all adds up to good news and, more than likely, brings in a healthy revenue stream. 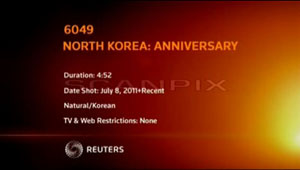 The first video has already appeared on the Reuters TV wire.

On July 9, two days before the deal was officially announced, Reuters carried 4 minutes and 52 seconds of video on commemorations surrounding the death of Kim Il Sung.

The story intro: “North Koreans pay respect to founder and former leader Kim Il-sung by visiting memorial sites and exhibitions on the 17th anniversary of his death.” 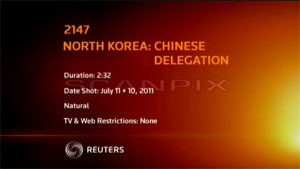 A second story appeared on July 12 and covered the arrival of a Chinese government delegation to mark the 50th anniversary of a friendship treaty between the two countries.

The source of both videos was identified as “KCNA for Reuters.” The “for Reuters” is typically not appended to the name of the supplying agency and indicates some extra level of cooperation between the agencies.

Scripts for both included the disclaimer “Reuters cannot independently verify the video’s accuracy.”

Such are the ethical problems associated with video from a government-run news service in an authoritarian country.

Video first appeared on the KCNA website in January this year, soon after the news agency launched its Pyongyang-based website. At the time we noted that it might be destined for TV broadcasters:

Of additional interest is KCNA’s plans for the new videos. They are much lighter on propaganda than the kind of video regularly seen on national television and are much more in the style of shot that are provided by TV news agencies to clients.

The lack of narration and the use of split audio (interviews on the left channel and ‘natural sound’ on the right) matches news production standards, and the “KCNA” type in the top-left corner is likely to discourage piracy. Perhaps KCNA has plans to offer video in the same way it provides text and photos. – “KCNA Launches Video News,” North Korea Tech, January 2, 2011

Where will it go from here? As they say on TV, stay tuned.