Hot on the heels of agreements between Korean Central News Agency and both The Associated Press and Reuters to more widely distribute KCNA video, The AP has withdrawn a KCNA photo saying it’s not what it appears to be.

The photo, below, was distributed to AP members and customers on July 16 and purports to show floods that hit Pyongyang a day earlier. 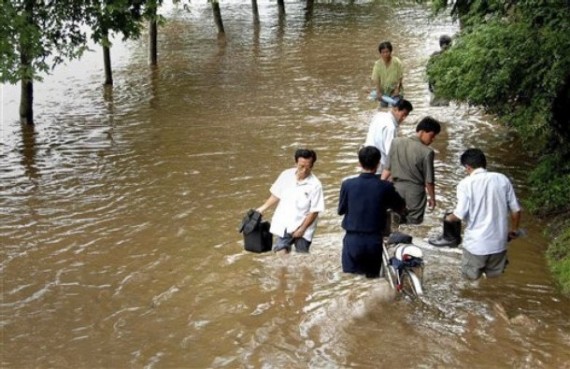 On Sunday, a day after the picture originally ran, the AP decided something about the picture didn’t quite look right and issued a “kill notice” — a message telling subscribers the agency no longer stands by the photo. 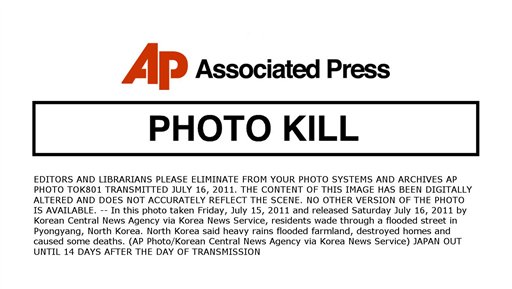 EDITORS AND LIBRARIANS PLEASE ELIMINATE FROM YOUR PHOTO SYSTEMS AND ARCHIVES AP PHOTO TOK801 TRANSMITTED JULY 16, 2011. THE CONTENT OF THIS IMAGE HAS BEEN DIGITALLY ALTERED AND DOES NOT ACCURATELY REFLECT THE SCENE. NO OTHER VERSION OF THE PHOTO IS AVAILABLE.

In layman’s terms that means AP editors suspect the image was Photoshopped.

The message doesn’t specify where the problems lie. Unfortunately, I don’t have a high-resolution copy of the image to more closely analyze but a couple of areas of concern might be the way the people’s legs neatly enter the water, the lack of dark water marks on their trousers and a series of horizontal lines running across the water, particularly on the left of the image (although some or all of these might be due to JPEG compression on the file above.)

If true, it highlights one of the problems both agencies face in their expanded agreements with KCNA.

It’s not the first time the agency has been suspected of messing with images. In 2008 it was accused of trying to pass off old photos of Kim Jong Il as fresh and adding Kim to an image of soliders. The AP got someone to look at the latter photo, and he concluded it probably wasn’t manipulated.

As noted Friday, Reuters is adding a disclaimer to the KCNA video it distributes: “Reuters cannot independently verify the video’s accuracy.” The agency has yet to carry any video images of the flooding.

1 Comment on "AP kills KCNA photo, says it was altered"