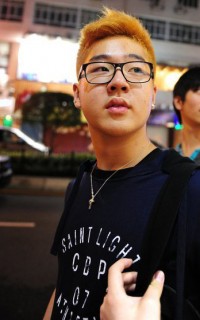 The teenager believed to be the 16 year-old grandson of Kim Jong Il has scrambling to delete or block access to his Internet social media accounts after news spread of his admission into a Bosnian school.

Attention was focused on the accounts — one on Facebook and two on Twitter — after South Korean media reported that Kim Han Sol had been accepted into the United World College in Mostar, Bosnia.

Pictures posted on the social media services, including the one to the right, were published by South Korean media organizations before access was restricted. The images and comments written by Kim Han Sol have attracted a lot of attention for the insight they provide into his life. One picture in particular has been highlighted because it shows the teen with his arm around a woman, reported to be his girlfriend.

There’s still no confirmation that person in question is Kim Jong Il’s grandson but there’s a considerable amount of circumstantial evidence that he is. The blocking of the Facebook and Twitter accounts was interpreted as more proof. “An action seen as confirming suspicions that he was indeed son of Kim Jong-il’s eldest son Jong-nam,” said The Korea Herald.

There were two Twitter accounts. One was listed as public (although it’s now restricted).

Details of the account including the list of followers and accounts being followed are difficult to see, but Twitter’s privacy restrictions allow some information to be displayed. In this case, it’s accounts followed by Kim Han Sol that are also followed by the @northkoreatech Twitter account: 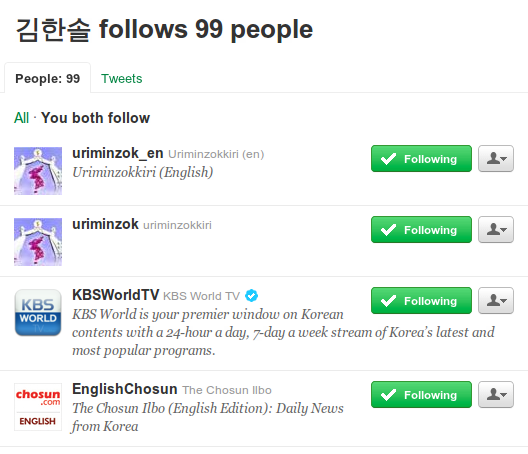 But that’s not the end of his cyber footprint.

A Blogger page called “Inside Han Sol”, offered a list of his interests, favorite movies and favorite music: 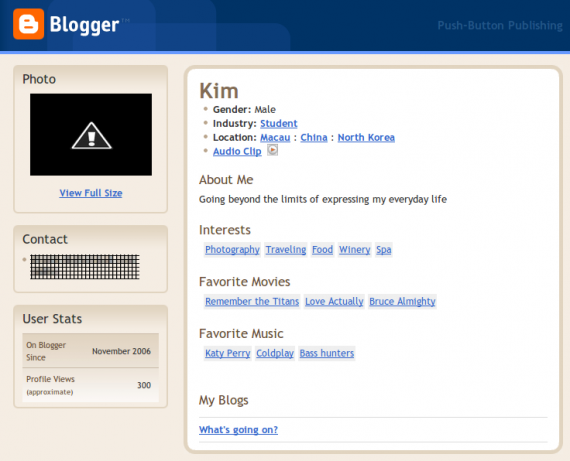 On Monday the blog was deleted.

A second blog, called “Pimp Your Grades,” also appears to be the work of Kim Han Sol and contains advice on studying and passing exams. The WordPress account uses the same “kimhs616” as one of the Twitter accounts and the profile says:

About
I’m from Korea, currently studying at the School Of The Nations Macau.
I found many ways to use your brains effectively.
So guess what, this blog is going to be about your 2 Lil brains, and how they can do such amazing things.

But perhaps some of the most interesting reading are the comments left on YouTube by a user that appears to be Kim Han Sol. The user’s account, closed on Monday, used the same kimhs616 account name and the profile listed the user as being from North Korea:

The profile included a text “cancer ribbon” and a list of the user’s basic beliefs:

There was also a lengthy explanation of the YouTube account, which appeared to be largely used to link to DPRK-related videos, and a rant about westerners that misunderstand communism:

Comments from user kimhs616 can be found under several YouTube videos. On a video about 3G cell phones in North Korea:

i’ve been to NK this summer and almost everyone now carries a cell phone. It doesnt do international calls, only local.
kimhs616 1 year ago

On a video showing North Korean soldiers marching, “kimhs616” sent an English greeting from Pyongyang and had a brief conversation, in Korean, with another YouTube user.

On a video showing an anti-DPRK demo in Seoul that includes hundreds of people holding candles, the user commented:

And then there was the discussion under an Uriminzokkiri video:

What? To poor to afford scenic backgrounds now?
Get the fuck out of the hotel conferance room.
NickyAmerica 9 months ago

Fuck off fatty.
kimhs616 9 months ago

^—Implying that every american is fat.
NickyAmerica 9 months ago

Thats ironic because Kim Jong Il is having strokes.
And your not from North Korea, Their citizens aren’t even alloweed on Youtube or Facebook because of some bullshit Anti-PeopleWhoMakeMoneyBecause­TheyWork system.
NickyAmerica 9 months ago

What makes you so sure? Oh right, americans are just as brainwashed.
kimhs616 9 months ago

Defectors, Numerous foriegn and local media sources, Pretty much everyone outside of the Great Asian Prison Camp.
NickyAmerica 9 months ago

yeah yeah keep talking. Anything else?
kimhs616 9 months ago

Yes, You’ve switched from your baseless, unintelligent statements to letting me move along with making you look like an ass. Good job.
NickyAmerica 9 months ago

pfffft lmao! How dumb can you americans be? like seriously, there has got to be a limit, now go drop your cigarette and your cheeseburger and go read a book. I’d suggest you to go study some geography. hahaha now move along, keep talking if you want to keep proving that your like all those dumb ignorant bastards 🙂
kimhs616 9 months ago

Go Google (Or search) “Life in North Korea” You might find a video of North Korean kids smoking, the video was caught by a Chinese or Korean man to show people the daily life on the streets of North Korea.
And your the one thats being Ignorant, saying we all eat Cheeseburgers and smoke cigarettes, Your bluntly assuming this.
NickyAmerica 8 months ago

Oh here’s another proof ignorance, applying what you saw from few kids smoking in a random street to the whole of North Korea, wow how come I’m not surprised? Have you even been to Nkorea? NO. I travel to North Korea every August through China, and when I see from 2 different perspectives, I know what the hell is going on. You, DON’T 🙂 Clear up your mental cesspool, or contact your local mental institute.
kimhs616 8 months ago

LOL, Im not assumting thats all of North Korea. You just dont understand what Journalism is…
The person had heard about how bad life is in North Korea so he set out to get video evidence, It might not be all of North Korea, but it certianly gives people somthing to compare what they have heard to what they have seen.
Oh, And by the way, North Korea in some places is worse then the videos, Like the concentraition camps that defectors draw pencil pictures about.
NickyAmerica 8 months ago