Aircraft flying between The Philippines and Japan are being cautioned that three air routes cross the area in which part of North Korea’s Unha-3 rocket is expected to fall to land. 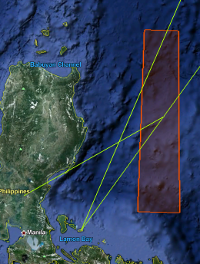 The area is identical to the “second stage falling area” that was notified to international maritime authorities earlier this week. The Unha-3 rocket is a two-stage design and one part is expected to drop into the sea to the west of South Korea with the other falling near The Philippines.

The message advises pilots to “exercise caution navigating airways A582, R597 and A590 that traverse a satellite launching falling area.” The launch time matches that provided to the IMO: 7am to noon local time (2200 to 0300 GMT) from April 12th to 16th.

The full “Notice to Airmen” (NOTAM) message is below:

And here’s the map: