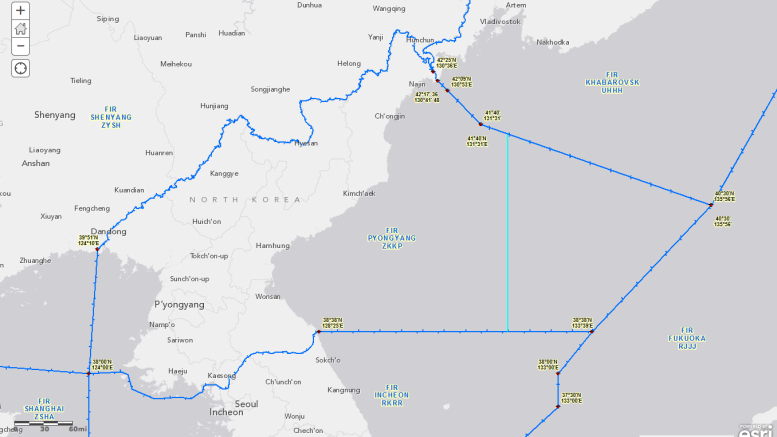 The shooting down of MH17 over Ukraine has raised awareness of a series of restrictions the U.S. Federal Aviation Administration has placed on aircraft operating around the world, including over North Korea.

North Korean airspace extends well beyond the land borders of the country to include a large portion of the Sea of Japan (East Sea) and, to a lesser extent, a region over the Yellow Sea (West Sea.) It’s called the Pyongyang FIR (flight information region) and is shown in the map below.

The FAA regulations date back to April 1997, when North Korea began allowing foreign airlines to fly through its airspace. That included U.S. carriers, but they couldn’t exercise the option because the Office of Foreign Assets Control prohibited payment of the so-called overflight fees. On April 7, OFAC lifted that restriction, effectively clearing the way for American air carriers to use North Korean airspace, but it didn’t last long.

The FAA cited safety concerns, but specifically the danger of civilian aircraft being shot down.

“The DPRK air defense system includes modern surface-to-air missile systems and interceptor aircraft capable of engaging aircraft at cruising altitudes,” the notice said. “The FAA has been unable to determine the current level of coordination and cooperation between civil air traffic authorities and air defense commanders for civil aircraft overflights, including military rules of engagement if an aircraft strays from its assigned flight route. Any lack of coordination presents a risk that civil aircraft operating in the Pyongyang FIR west of 132 degrees east longitude could be misidentified as a threat by the DPRK.”

“Given the DPRK’s air defense capabilities, including its rules of engagement and limited capability to distinguish between military and civil aircraft, the FAA has determined that civil aircraft operating in the Pyongyang FIR west of 132 degrees east longitude could be misidentified and inadvertently engaged by the DPRK.”

I’ve added the 132 degrees East line to the map below in light blue. (Click to make the image larger)

The FAA however extended its prohibition to the entire Pyongyang FIR, including the area east of the 132 degrees east line, pending review of safety information from the DPRK. It stayed that way for almost a year, with the FAA allowing flights in the eastern most part of the region from February 1998. 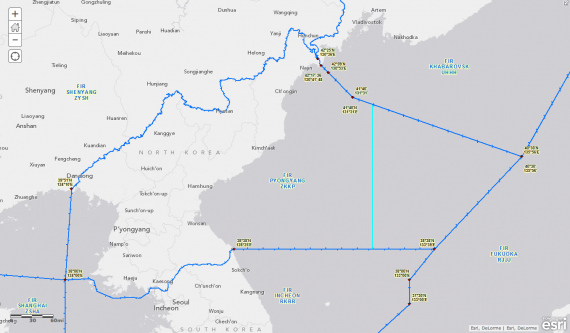 The Pyongyang FIR with an additional line added around 132 degrees East (Image: ICAO)

There are a couple of additional exceptions. U.S. pilots and aircraft can be taken into Pyongyang with U.S. government or FAA approval, typically on diplomatic or humanitarian missions, and in emergency situations.

The FAA revisited these restrictions in June this year.

The FAA said it would review the need for the caution by November this year.

While North Korea’s recent short- and medium-range missiles fell within the boundaries of its airspace, the countries long-range missiles overshoot the region. On occasions in the past when that’s been likely, the DPRK authorities have issued warnings to air and sea traffic on some occasions.

For example, in 2009 the country advised the International Civil Aviation Organization (ICAO) that it would be launching a long-range missile. Here’s a map of the Pyongyang FIR with the drop zone for the first-stage indicated as “danger area 1.” The second-stage of the rocket overflew Japan and landed in the Pacific Ocean.

This map also shows the various airways that cross through the Pyongyang FIR, including several in the area to the east of the 132 degrees east longitude line.

The FAA’s June advisory was accompanied by an International Flight Information Manager (IFIM) notice that specifically mentioned two of the air routes that can be see in the map above.

The FAA also asked pilots to report any observed launches.