A cyber attack on three of South Korea’s major broadcasters and several of its major banks appears to have been caused by a relatively unsophisticated piece of software, security researchers said Wednesday. [Story updated, see below]

The attacks, which began at around 2pm local time on Wednesday (5:00 UTC) left desktop and laptop computers unable to start at KBS, MBC and YTN and took the auto-teller machines at Shinhan Bank and Nonghyup Bank offline. It didn’t affect the ability of the TV stations to put out programming.

The root of the attack was a malicious piece of software identified by computer security company Sophos Labs as “Mal/EncPk-ACE.” The rather forgettable name has resulted in it being dubbed “DarkSeoul” by researchers at the company who analyzed the code on Wednesday.

“What’s curious is that the malware is not particularly sophisticated. Sophos products have been able to detect the malware for nearly a year, and the various commands embedded in the malicious code have not been obfuscated,” the company said in a blog posting.

For that reason — and based on its analysis of the software code alone — Sophos said it’s difficult to conclude the malicious software constituted a “cyberwarfare” attack from North Korea.

Whatever the source, the software was directed at South Korean computers because it attempts to disable two popular local anti-virus scanners, AhnLab and Hauri AV, Sophos said. 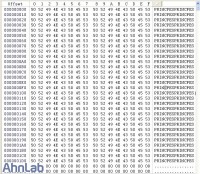 When a computer is infected, the software appears to create several files in the “temp” folder of the PC, AhnLab said in a blog posting. The new files include a routine to destroy the master boot record of the disk — the hard disk’s electronic directory of where information is stored.

A computer with a damaged master boot record won’t start — exactly the behavior reported by companies hit by the attack.

In some cases, the malicous code will attempt to overwrite data on the hard disk. In some cases, data is overwritten with the word “PRINCPES” while other cases saw the words “HASTATI” and “NCPES” used, said researchers.

Separately from the malicious software, network analysis company Renesys said it detected an impact in several South Korean networks as a result of the attack. 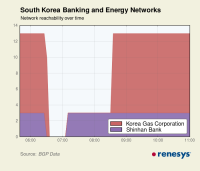 The problems at Korea Gas could be coincidental, but Renesys notes that South Korea’s 15,000 networks are usually pretty reliable with only 40 or 50 offline at anyone time, usually for technical reasons.

“However, networks from these sectors (Media, Energy, and Banking) are typically some of the most stable, and the timing of their simultaneous outages seems suspicious.”

03/22 UPDATE: Korea Gas contacted Renesys to tell it the network was deliberately taken offline when the attacks were reported to protect its system.

The attack came less than a week after North Korea’s considerably smaller Internet was hit was an unknown glitch that resulted in difficulty accessing web sites for almost two days. North Korea blamed the U.S. and its allies for a cyber attack but offered no other details of the incident, which was only reported in the country’s foreign media output. 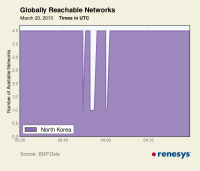 “Since last week’s disruption in connectivity in North Korea, we have observed additional brief routing outages for the four routed networks of North Korea. On Monday (18 March) and this morning (20 March), we observed outages lasting for just a few minutes in North Korea. It should be noted that although North Korea’s Internet is small, it is very stable. Until last week, North Korean outages had been very rare.”

Additionally, an attack on the website of Internet provider LG Uplus is looking increasingly like it was unrelated to the troubles at the TV stations and banks. The attack resulted in replacing the service’s home page with a page that claimed responsibility in the name of “Team Whois.”

The same behavior wasn’t reported in the other attacks and Sophos said it had been unable to replicate it. 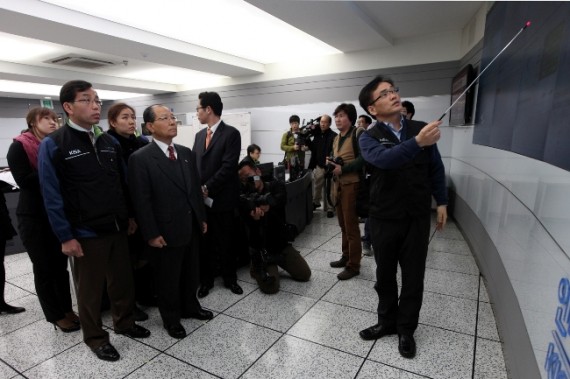