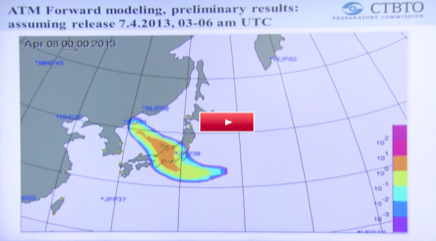 A nuclear monitoring station in Japan has recorded what could be the first detection of radioactive noble gases from February’s nuclear test in the DPRK.

The station is in Takasaki, about 100 kilometers northwest of Tokyo and about 1,000 kilometers from North Korea’s Punggye-ri nuclear test site, and is operated by the Comprehensive Nuclear Test Ban Treaty Organization (CTBTO), which made the announcement on Tuesday.

Detected were two radioactive isotopes of the noble gas xenon: xenon-131m and xenon-133 — something the CTBTO called “rather unusual.”

Noble gases are one of four things the CTBTO looks out for in its nuclear monitoring process. That’s because the gases can be released by either slowly seeping through rock and sediment from underground to the surface after a nuclear test or come from activity at a test site.

The CTBTO said the ratio of the detected xenon isotopes is consistent with a nuclear fission event occurring more than 50 days before the detection, so that matches the timeframe for the North Korean nuclear test. Further, atmospheric modeling indicates the isotopes could be carried from Punggye-ri to Takasaki.

But despite all these clues, the CTBTO isn’t quite ready yet to say the detection is definitely linked to the February test in the DPRK.

“We are in the process of eliminating other possible sources that could explain the observations; the radionuclides could have come from a nuclear reactor or other nuclear activity under certain specific conditions, but so far we do not have information on such a release,” Mika Nikkinen, a CTBTO expert said in a statement.

It was the CTBTO’s monitoring system that was one of the first indicators that the DPRK had conducted its nuclear test.

The organization maintains almost 100 seismic stations that look for the telltale seismic activity that occurs with a nuclear test and on February 12th those stations recorded the event at 2:57:51 UTC (11:57:51 local time). The test was measured at magnitude 4.9 and located at latitude 41.313 degrees north and longitude 129.101 degrees east.

Watch these clips for more details: