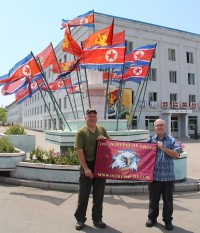 Members of the Intrepid DX group hold their banner next to a monument in the DPRK. (Image: P5 Project blog)

Two ham radio operators hoping to get permission to set up a temporary amateur radio station in North Korea have returned from a trip to the country and have plans to visit again.

Paul Ewing (N6PSE) and David Flack (AH6HY) of the “Intrepid DX” group wrote that they will refine their proposal and “continue to communicate with the Ministry of Foreign Affairs and the Ministry of Posts and Telecommunications.”

The two want permission to lead two groups of twelve people each on a two week expedition to the DPRK. While inside the country, they plan to operate an amateur radio station and make contacts with ham operators around the world.

Getting government permission for the plan is, of course, essential.

During their June trip, the two entered the DPRK in Namyang, near Tumen, and traveled as far south as Panmunjon, before leaving the country at Wonjong, near Rajin.

“The purpose of the visit was to meet with DPRK Government Representatives in Pyongyang and to survey and assess various potential Dxpedition venues throughout the country. Particular attention was paid to terrain and the availability of reliable power,” they wrote on the “P5 Project” blog.

The project is named for North Korea’s radio callsign prefix “P5.” Because the country has no licensed amateur operators, contacting a P5 radio station is extremely rare. If the group manage to get permission of their plan, they should receive a temporary P5 call sign and there will likely be strong demand to communicate with the station from overseas ham operators.

“Our goals are to provide a much needed P5 contact to the entire amateur radio community world-wide,” they wrote.

The two are now planning a second visit and, in what could be a savvy political move, have added a representative of the Chinese amateur radio community to their group: Fan Bin (BA1RB).

(For background on the project and previous attempts to operate ham radio stations from North Korea, see “Ham radio operators hope to put North Korea on the air” from June 11.)

Smartphone imports from China said to have hit record in 2014