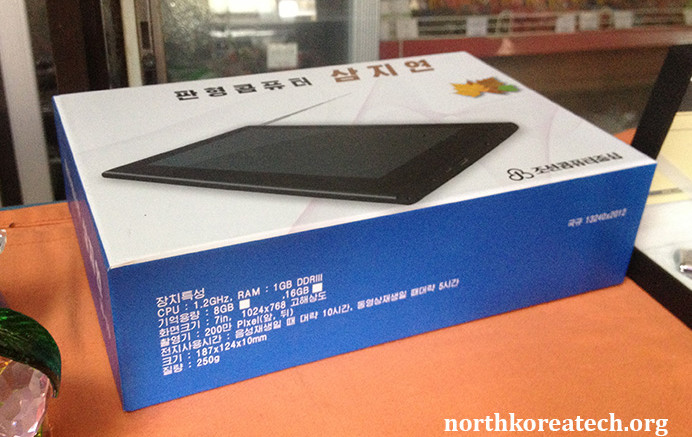 A model of North Korea’s Samjiyon tablet is up for sale on Ebay.

It appeared on the morning on Thursday, November 7, and appears to have been listed by a Canadian account with a shipping location of Yanji in China. Yanji sits just across the border from North Korea.

Its appearance followed a second-round of publicity for the Samjiyon that coincided with a review published by 38 North.

The Android-based tablet debuted at an opening bid of $4.15 — a possible reference to April 15, the “Day of the Sun” holiday that marks Kim Il Sung’s birthday — and its price has been jumping ever since.

That’s not a bad premium on a product that sells for around $200, according to reports from tourists who have seen it on sale in North Korea.

The tablet on Ebay appears to have slightly lower specifications than the model reviewed by North Korea Tech in August.

The previously reviewed tablet had a faster 1.2GHz processor, 8GB or 16GB of memory, and a 7-inch screen with higher resolution of 1,024 by 768 pixels. It measured 187 by 124 by 10 millimeters and weighed 250 grams, which made it slightly smaller with an equal weight.

And unlike the previously-reviewed Samjiyon, the Ebay model doesn’t have an internal TV antenna. A cable is supplied that allows an antenna to be connected to the computer.

A Samjiyon tablet is advertised on Ebay on November 9, 2013.