A Washington, D.C.-based journalist and blogger has managed to obtain details on web traffic to the Korean Central News Agency’s website thanks to poor security on a previous version of the site.

Writing on his blog, Dino Beslagic said he was able to access the site traffic data through a hidden interface page on the KCNA website. Rather than block off access with a firewall, the site allowed access to the page after simply acknowledged a pop-up window.

Access to the data enabled Beslagic to produce a graph of daily visitors and number of hits for the period from April 2011 to December 2012. This period covered the December 2011 death of Kim Jong Il and the resulting spike in traffic is obvious. 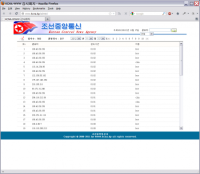 The KCNA web analytics page, as captured by Dino Beslagic

For most of 2011 until that point, the site attracted just a few hundred visitors per day. On the day Kim died, this jumped to 45,487 unique visitors on December 20 and 71,239 page views. Traffic quickly dropped off but settled at a higher level of between 2,000 and 3,000 visitors per day.

Traffic slowly rose through 2012 until it was averaging between 3,000 and 4,000 visitors per day in the second half of the year.

The switch to a new web design apparently cut off access to the web analytics page so the data stops at the end of 2012.

See the complete analysis on his site.