Singapore-based photographer Aram Pan is providing a new way to look at Pyongyang through some spectacular panoramic images and GoPro videos.

Pan has just arrived back from his latest trip to the country and has already posted a nighttime image of Kim Il Sung Square and a daytime image from Mansudae Hill.

“You don’t need specialized cameras to shoot great panoramas at all. In fact, even a cheap DSLR in the right hands produces far better panoramas than anything those expensive Google street view systems can achieve. You really can’t ever take the photographer out of the equation when it comes to good image capturing.”

He’s also taken a Ricoh Theta camera to the country, a small, handheld panorama camera, and captured this image of high-school girls.

So how did Pan manage it without attracting the wrong type of attention?

He said the project began when he started emailing and faxing North Korean embassies and organizations with his idea.

“And one day someone replied,” he said.

“I’ve heard that it ranged from difficult to impossible for journalists and photographers to do something even remotely similar so I have no idea how everything fell into place,” said Pan. “I wasn’t some basketball star or google CEO… I’m just a regular photographer… Maybe it’s luck, maybe someone likes my portfolio? No idea man.”

Pan also managed to attach a GoPro camera to the front windshield of a car for a 22-minute trip through the city. 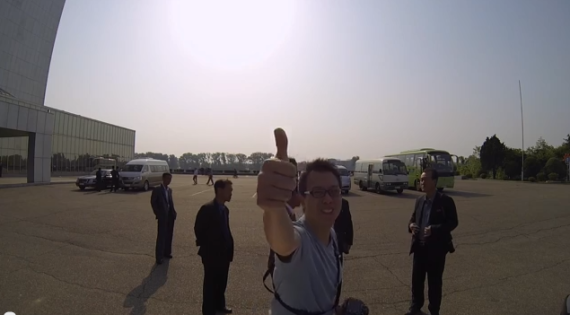 Aran Pan gives a thumbs up at the beginning of his GoPro drive through Pyongyang video.

My guides did the explaining to the driver after I explained to them so there wasn’t any issue sticking the GoPro to the windscreen of the car,” he said.

As for what’s next, Pan said he still has images from his most recent trip that are waiting to be processed and posted on his DPRK 360 website.

“I’ve used the GoPro in North Korea for horseback riding, general video capture and swimming with the locals,” he said. “Yup. I went swimming in their public pool. I’ll be publishing that video later on.”