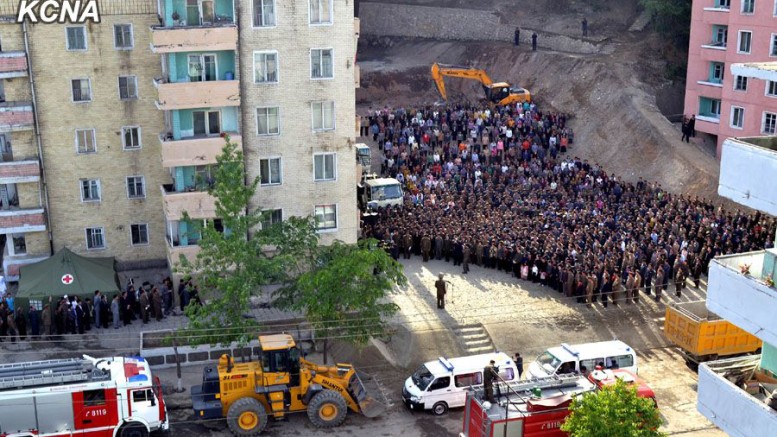 Site of Pyongyang building collapse as shown by KCNA.

The revelation by North Korean state media on Sunday that Pyongyang suffered a major construction accident underlines how strong the regime’s grip on information flow remains, despite cracks appearing in recent years.

The accident occurred on Tuesday, according to the domestic media reports, but the world didn’t hear anything about the incident until those first reports were published on Sunday. By then, the rescue efforts had been completed and, apparent from images, the site had already been cleared of all debris.

The reports were unclear about the exact accident and number of casualties, but it appears likely an entire apartment block collapsed causing many tens of deaths. 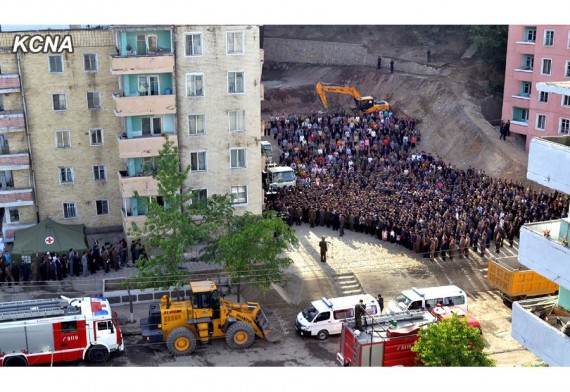 Site of Pyongyang building collapse as shown by KCNA.

It’s highly unusual for North Korean to acknowledge such accidents, so the reports and admissions of guilt probably mean a sizable portion of the population already knew about it — at least in Pyongyang — and the government is trying to put a cap on gossip and complaints.

So, if that’s the case, it’s perhaps surprising that word of the accident never left the country.

The government goes to great lengths to control the flow of information, both within the country and across its borders, but in recent years, North Korea’s information blockade has appeared to become a little more porous.

It’s becoming more and more common to hear unconfirmed reports of executions, acts of dissatisfaction against the government, wrinkles in the domestic economy and the like through leaks typically facilitated by Chinese cellphones used a few kilometers inside North Korea.

Such stories are impossible to prove or disprove and often get picked up by mainstream media outlets, especially if they appear to confirm widely-held beliefs about North Korea.

Late last year, for example, it was widely reported that Kim Jong Un’s former girlfriend, Hyon Song Wol, had been among a number of people executed for the particularly salacious crime of appearing in a pornographic video.

“According to sources, both the Japanese and South Korean governments have confirmed the veracity of the report,” reported Japan’s Asahi Shimbun at the time.

Except it appears to have been completely false. Last week Hyon was shown on national television praising Kim Jong Un while speaking at a meeting of performers in Pyongyang. 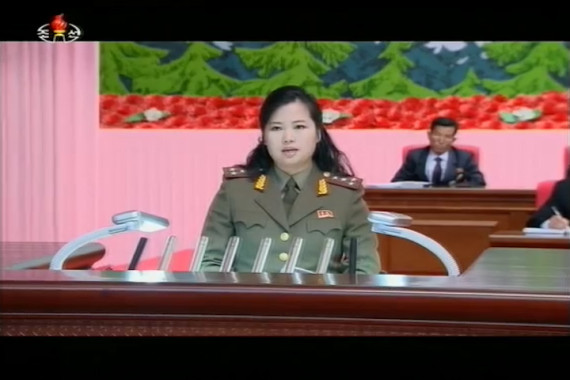 Hyon Song Wol speaking at a national meeting of artistes as shown on Korean Central Television on May 18, 2014.

It’s possible of course that the footage was old, but highly improbable that anyone who had been disgraced or executed would be shown on television praising the leader, so it’s safe to assume Hyon is very much alive.

The degree to which North Korea’s domestic affairs are opaque was most vividly demonstrated in late 2011, when leader Kim Jong Il died. The government managed to keep a lid on the news for several days and the announcement of his death, again in the domestic media, appeared to come as a surprise to foreign governments.

Getting information into the country on a timely basis is possible with shortwave radio, despite North Korean efforts to jam the broadcasts, but there’s only so much international news the North Korean audience wants. What would be truly valuable would be the broadcasting of uncensored domestic news back into the country, but that requires the information to get out in an accurate and timely manner and that, as the building collapse suggests, is still a long way from being realized. 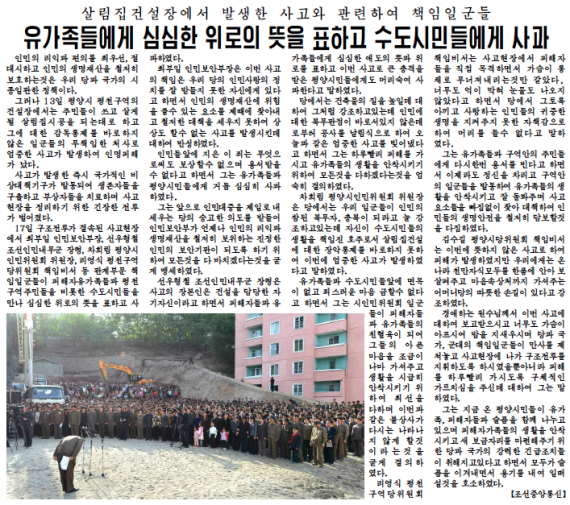 Rodong Sinmun reports on the Pyongyang building collapse on page 4 of its May 18, 2014, edition.