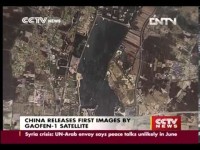 The Gaofen-1 satellite has been used to discover “about 10” such crossings both on the China-DPRK border and in the Xinjiang Uygur region of northwest China, said China Daily reported, quoting the China National Space Administration.

The satellite has also been used to spot poppy plantations in Heilongjiang and Hebei provinces, marijuana growing in Jilin province and suspected oil smuggling off the coast of Fujian province.

Gaofen-1 was launched in April 2013 and is capable of taking images with 2-meter resolution, according to published specifications. That means the smallest feature visible on an image is 2-meters in size — not sharp enough to capture individuals. So it’s possible the satellites are detecting temporary camps in border areas or footpaths that are used to reach the border. (See update, below)

News of Gaofen-1’s role in combatting border crossings and crime comes just days after China launched Gaofen-2, the second in the planned fleet of six high-resolution imaging satellites that is scheduled to be complete by 2020.

Gaofen-2 is reported to have a resolution of 80 centimeters — much better than that of Gaofen-1.

The stated mission of the satellites is to aid in disaster prevention and relief, monitor climate change and deforestation, mapping and provide data for the agricultural sector.

In contrast, the WorldView-3 satellite recently launched by DigitalGlobe, a U.S.-based commercial satellite imagery provider, has a resolution of 30 centimeters. The U.S. military has its own surveillance satellites that likely have resolution in the single-digit centimeter range.

A later story published by China Radio International indicates that the satellite didn’t detect people or their camps but tunnels across the border.