The Egyptian company that runs North Korea’s sole cellular network appears to be finally confronting one of its biggest problems in North Korea: the value of its money there.

Egypt’s Orascom Telecom and Media Technology (OTMT) said on Tuesday that it is delaying the filing of its latest quarterly financial report while it attempts to agree with the North Korean government on the value of its cash held in the country.

At the center of the problem is the exchange rate for the North Korean won and rules on money transfers.

OTMT had $767 million in assets in North Korea at the end of 2014, according to an auditors report released earlier this year. The vast majority, some $585 million, was being held in cash. 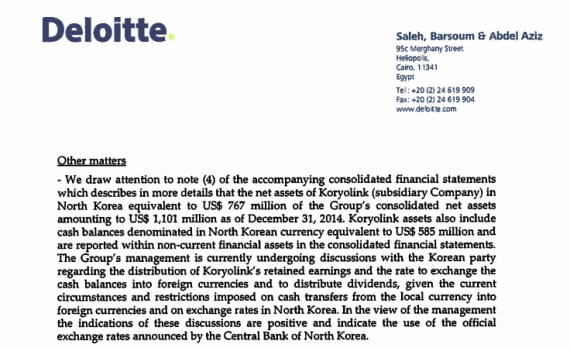 That’s a significant chuck of change, but it’s not actually held in U.S. dollars. The company calculated that figure using the official government exchange rate of about 100 North Korean won to the U.S. dollar. At that rate, Orascom has about 58.5 billion North Korea won in cash.

But the blackmarket rate values the won much more cheaply. About 8,200 won are required to buy a single dollar, putting the value of OTMT’s cash at about $5.7 million.

That’s quite a difference, thus the discussions.

OTMT said it hopes to have an answer from the North Koreans in the next few days.

The company owns a 75 percent stake in Cheo Technology, which markets its service under the Koryolink brand name. The rest of the company is owned by North Korea’s Ministry of Posts and Telecommunications.

It launched 3G service in late 2008 and has attracted more than 2 million subscriptions, although the actual number of users is unknown.

Anecdotes from inside the country say some people have more than one subscription because it’s cheaper to purchase multiple accounts than to run up large charges on a single line.

This two-tier system is typical of North Korea’s telecommunications network and is one way the government prevents its citizens from accessing information from outside the country.

The 3G license gave Koryolink exclusive rights to operate cellular service for five years. That’s been expired for more than five years but to-date no other competitors have entered the market.