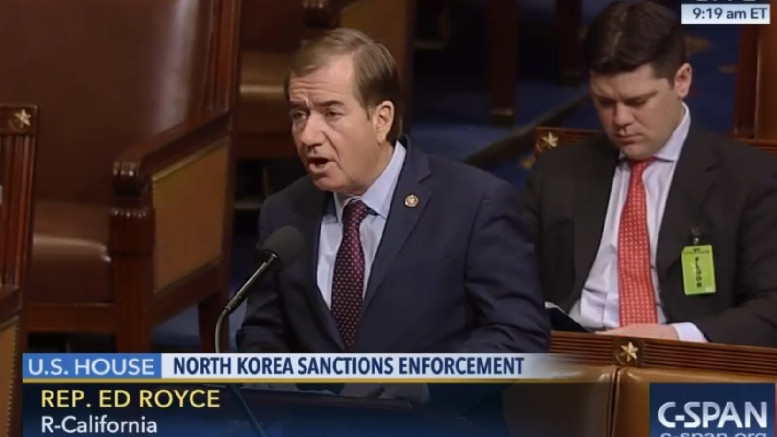 A bill intended to tighten sanctions on North Korea and anyone working with the country passed the U.S. Congress on Friday. Its next stop is the desk of President Obama.

House Resolution 757 (HR757) is the first bill to pass both houses of congress that specifically targets North Korea and was proposed by Ed Royce, a California Republican and chairman of the House Foreign Affairs Committee, after North Korea conducted a nuclear test in January.

The bill will penalize any person, company or government that helps North Korea in its nuclear and ballistic missile programs. It also targets those who help North Korea conduct cyber attacks and those who aid the country’s human rights abuses or supply luxury goods to the country.

It passed the House by 418 votes to 2, and then sailed through the Senate on Thursday by 96-0.

Before that vote, Senate Majority Leader Mitch McConnell, a Kentucky Republican, and Minority Leader Harry Reid, a Nevada Democrat, each urged their party members to vote in favor of the bill.

“I hope my colleagues will join me in passing this legislation immediately, and send a message to Kim Jong Un that his reckless behavior will not go unanswered,” said Reid.

The bill was back in the House on Friday to get final approval after the Senate added some lines to the bill. It passed 406-2 on Friday.

The White House has said that President Obama will sign the legislation.

“Like many members of Congress, the administration is deeply concerned about North Korea’s recent actions and the serious setback that this test represents,” spokesman Eric Schultz told reporters onboard Air Force One, according to several media reports. “We’re philosophically and intellectually in the same place as the Congress on this. This will not be a bill that we oppose.”