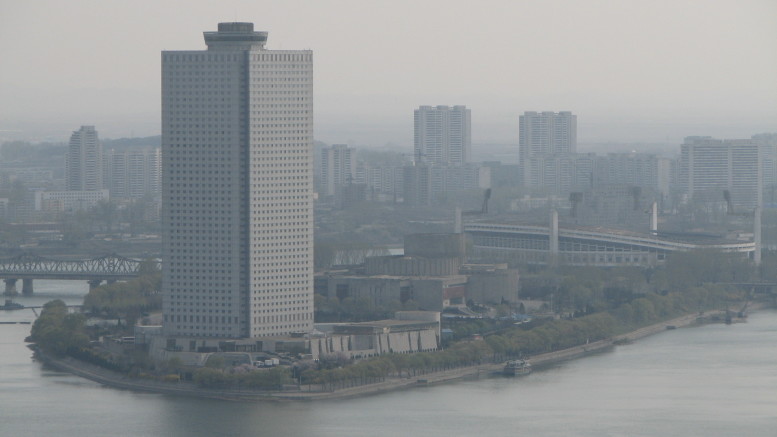 For the more than 100 foreign journalists in Pyongyang right now, Friday was apparently a frustrating day. Rather than being invited to the Seventh Workers’ Party Congress — the very event they are in town to cover — they were instead taken to the Pyongyang 326 Electric Cable Factory.

I don’t know much about the Pyongyang 326 Electric Cable Factory. It might be a very nice factory, but it looks a tad boring … especially when North Korea’s biggest political event in over three decades is going on down the street.

So despite the time and expense of traveling to Pyongyang, what was going on inside the April 25 House of Culture was unknown.

The congress has attracted some 2,932 delegates and observers, according to state media, but for much of Friday what was happening was known only to them.

The closest reporters got was down the street from the hall.

During the afternoon, the state-run news agency stayed quiet. The five o’clock news came and went on Korean Central Television without a mention, so did the main eight o’clock evening news.

No live coverage of #NorthKorea's historic 7th Workers Party Congress on state TV. This is a revolutionary drama. pic.twitter.com/DiHQDLA1HH

It wasn’t revealed until around 10:30pm in the evening, when Korean Central TV ran an unscheduled report on the day’s proceedings.

So yes, the closest reporters in Pyongyang got to the congress was the same TV feed being monitored in newsrooms around the world.

This is how journalists in Pyongyang are having to cover the congress: off the tv pic.twitter.com/QGgYgDd8e0

That North Korea didn’t grant reporters access but chose instead to take them on a propaganda tour of the city shouldn’t come as a surprise to anyone that follows the country closely. Foreigners are kept on a short leash in North Korea, none more so that reporters. And the government loves any chance it can get to paint a positive picture of the country.

It was a little reminiscent of the 2012 satellite launch, when reporters who had traveled to Pyongyang learned from their newsrooms back home that North Korea had launched a rocket.

The congress will convene for a second day on Saturday, but what will happen remains unclear. It’s also not known when it will end.

On day one, Kim Jong Un spoke of the advances the country has made with nuclear and missile technology — at least according to the TV special and state news agency account. He presumably didn’t mention the several missile launch failures that are thought to have occurred.

But that doesn’t mean the trek to Pyongyang is a wasted trip. While the Pyongyang 326 Electric Cable Factory might not make the headlines, any access to North Korea can be useful because it provides context and background for future stories and helps in understanding the country better.

That was highlighted early on by Reuters’ James Pearson, who noted new high rise buildings in the city and evidence of rising standards of living for the residents of Pyongyang.