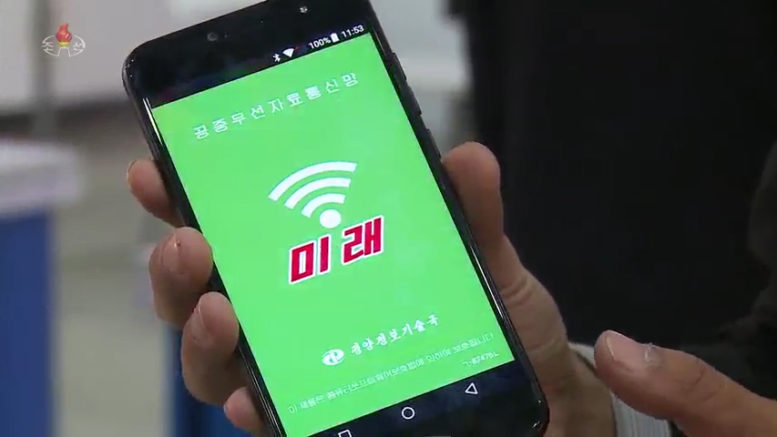 Korean Central Television recently broadcast a couple of reports about a new outdoor wireless data service in Pyongyang. The service is apparently based on WiFi but unusually requires a SIM card for access.

It’s called “Mirae,” which means “future,” and is up and running in central Pyongyang, according to the reports. It’s the first time an outdoor WiFi service has been mentioned in North Korean media and runs alongside two cellular networks operating in the country that provide wireless data service.

Both the WiFi and cellular services offer citizens access to North Korea’s nationwide intranet and not the global Internet.

The first of the two broadcasts was on October 21, 2018, and focused on a new tablet PC called the Daeyang 8321 (대양8321). One of the features that makes it popular, according to the report, is its ability to access a data network set up on Ryomyong Street in the capital city.

The tablet PC was supposedly developed by the Mankyungdae Martime Technology Exchange Center (중구해양기술교류사), which is part of the Central Science Technology Supply Agency (중앙과학기술보급국).

In all likelihood (and despite scenes that show workers examining LCD screens in a workshop) the tablet was probably bought from a Chinese OEM supplier with custom branding for Daeyang.

In the report a regular SIM card was shown being inserted into the unit. SIM cards are typically used for cellular services, but the TV report didn’t specify the type of network being used. An earlier report in Japan’s Chosun Sinbo newspaper and a later TV report said it is a WiFi service.

That’s an unusual use of SIM technology and probably helps ensure that authorities can maintain tighter access to the network and more easily track what individual users are doing online.

The TV report showed the service in use via a pair of antennas installed above a pedestrian area that appear to be outdoor WiFi base stations.

The same antenna was shown in the Chosun Sinbo report in August. It showed the Daeyang 8321 alongside one the antennas and what appears to be an Arirang 171 smart phone.

The photo above shows the Korean Central News Agency intranet site (which looks remarkably similar to its external Internet site) and reports have also said users can access the Rodong Sinmun newspaper and Kim Il Sung University pages among others.

The data speed of the service is said to be up to 70Mbps, which is a speed attained by WiFi and cellular 4G services. To-date, North Korea isn’t known to have a 4G network.

The second report was part of a package on the recently concluded Exhibition of IT Successes. It showed an Arirang 171 smartphone being used to access the Mirae network.

The report didn’t mention much about the network but said the smartphone — again, likely from a Chinese OEM supplier — featured a fingerprint reader and access to the Mirae network through a WiFi SIM card.

The phone is marketed in North Korea by the Arirang Information Technology Exchange Agency (아리랑정보기술교류사).

The two reports are below: