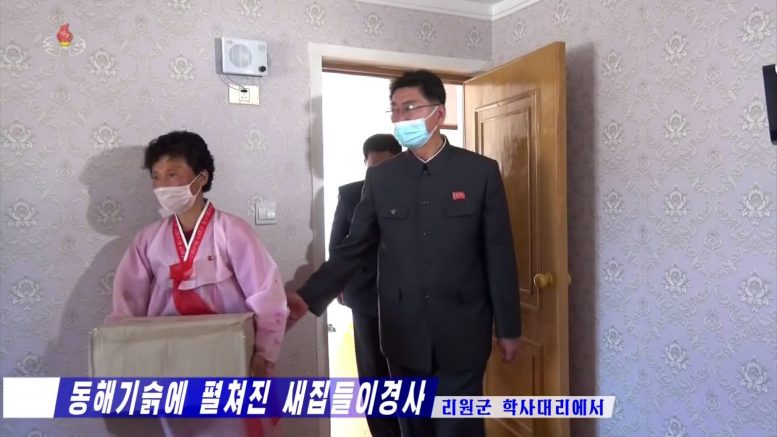 When hundreds of houses and apartments were completed last year, North Korean media showed residents entering their new homes, welcomed with a pile of household goods. On the wall of each home was something else provided by the state: a dedicated receiver for the country’s secretive third radio network (조선중앙제3방송) that relays daily news, instruction, and propaganda.

The network has been around since the 1950s and was understood to have become less important in recent years due to the country’s constant electricity problems, but that is set to change.[1]

At the recent Worker’s Party Congress, Kim Jong Un called for the third network (referred to as “wire broadcasting”) to be improved throughout the country:

“It is needed to readjust the wire broadcasting and cable TV networks, put the relevant technology on a higher level and provide full conditions for the people in all parts of the country, ranging from cities to remote mountain villages, to enjoy a better cultural and emotional life.”

Kim’s call comes as the country appears to be embarking on a new crackdown on foreign media and the third radio network could play an important part in that effort.

The third radio network mirrors similar closed broadcasting networks that existed in other Soviet bloc nations. In contrast to over-the-air signals which can be received outside of the country, the third network provides a way for the state to speak directly to citizens about more sensitive matters. This can include criticism of actions that are against the law, such as consuming foreign media.

The system allows for local broadcasting at the city or town level. While programming from Pyongyang occupies a large part of the day, provincial or city-level programs are provided for a few hours. This includes local news, civic information and mobilization instructions, and can get very personal with citizens named and shamed for arrests and law breaking, according to interviews with escapees.

If the system is working properly, it can be a powerful tool to lecture citizens daily.

A Central Intelligence Agency assessment of the third radio network in 1962 concluded that the network and its nationwide reach “offers a simple and quick means for the indoctrination of the masses in the more remote areas of the country.”[2]

But recent escapees have said the system has fallen into disrepair. In many cases the signal is weak and difficult to listen to, if audible at all, they say.

Revitalization work will fall to the Ministry of Posts and Telecommunications, which manages the network. On January 30, state television showed ministry workers dutifully studying the account of Kim’s speech in the newspaper and pledging to follow through on his wishes.

How they plan to do this wasn’t explained. Electricity is still a scarce commodity, but the video footage of new houses indicates the third network is still a basic part of North Korean life.

Just over a decade later, the country was plunged into famine as the economy collapsed and the network’s distribution cables and receiver boxes were plundered for scrap metal. The impact of those actions in combination with electrical power problems have hampered its effectiveness ever since.

Kim’s call to improve the third broadcast comes as the country appears to be embarking on a new crackdown on foreign media. In December, the Supreme People’s Assembly adopted the “Law on Rejecting Reactionary Ideology and Culture,” according to state media reports.

The law is a timely example of the use of closed networks by the state.

Details of the law and its penalties have not been disclosed by any North Korean media that can be monitored from overseas. Doing so would highlight the problem of foreign media and culture on the country. Instead, the state is disseminating details to citizens through the weekly propaganda lectures that all North Koreans must attend and, almost certainly, through the third radio network where it can be heard.

Alongside the new law, the state is also responding to the influx of foreign media by strengthening and expanding its own offerings. North Korea is expanding the availability of multi-channel television throughout the country via digital TV and intranet broadcasting. Up to four channels are now available in areas with the expanded service.

That was referenced in Kim’s call to improve “cable TV networks” alongside “wire broadcasting.” In this case, cable TV refers to the use of a wired network to carry TV signals to areas that have no over-the-air reception.