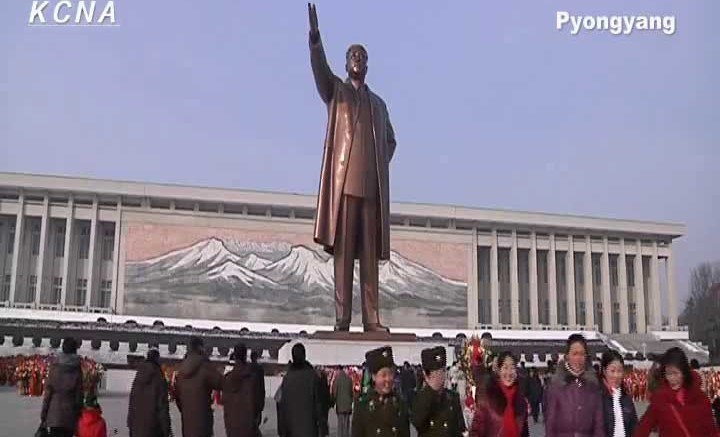 The Korean Central News Agency carried video news for the first time on its new home page on Jan. 1, 2011. Two video clips were posted as part of the daily news offering.

The first shows scenes from around Pyongyang, including families visiting the Mansudae Grand Monument, while the second includes more shots of the city and comments from a government official identified as Kim Pyong O, a department director in the Ministry of Light Industry, on the New Year editorial.

A close-up of the newspaper page clearly shows the date as Jan. 1. Of course, it’s possible to fake such a shot, but it seems much more likely that this is genuine footage from Saturday morning.

The video is standard-definition NTSC video (720 x 480 lines) but at PAL’s 25 frames per second and the quality beats that of the video posted by Uriminzokkiri’s YouTube channel and Tokyo-based Elufa.net.

Unlike most other Internet video, the site isn’t using a Flash player. The videos require the use of “HMS Player,” versions of which can be downloaded for Windows or Linux (sorry Mac users). I’ve looked into the software and the “kml://” address used and there doesn’t appear to be a whole lot of documentation available online.

Still, if you don’t want to run software downloaded from a North Korean server, or if you’re running a Mac, there is a way to get the video to play in Windows Media Player.

Clicking on a news story with attached video (the ones on the main page with a video camera icon next to them) will bring up the main news page with a picture representing the video. The picture is clickable and would launch the HMS Player if installed.

Rather than left clicking it, right click and copy the address. Then paste it into the address bar of your browser. Is should look something like this:

You’ll need to change the “kms” to “http,” then hitting return should get your browser to either open it in a media player already on your machine or prompted you to select a player.

The file is conventional MPEG4 video wrapped in an AVI file-type, so should work with Windows Media Player, VLC Player or any number of video players already installed.

Of additional interest is KCNA’s plans for the new videos. They are much lighter on propaganda than the kind of video regularly seen on national television and are much more in the style of shot that are provided by TV news agencies to clients.

The lack of narration and the use of split audio (interviews on the left channel and ‘natural sound’ on the right) matches news production standards, and the “KCNA” type in the top-left corner is likely to discourage piracy. Perhaps KCNA has plans to offer video in the same way it provides text and photos.

The only international TV news agency with a current full-time presence in Pyongyang is APTN.

The video is also being collected on a dedicated page.